MSE Department Head Dr. Alpay Discusses the Many Joys of His Academic Career

Dr. Alpay’s recent work with his team and collaborators is focused on metallic systems for aerospace applications. On the left is a titanium crystal structure displaying all potential defect sites. The figure on the right shows the minimum value of formation energies for impurity atoms selected across the periodic table. The most significant result from this study is that metallic impurities, regardless of their atomic size and the chemical environment, occupy substitutional sites while non-metals assume either interstitial positions or form impurity pairs resulting in dimers depending on thermodynamic conditions.

Professor S. Pamir Alpay, Materials Science and Engineering (MSE) Department Head, can find practical applications of science in almost anything, from fictional food replicators in Star Trek to 3-D printing of aircraft parts. Anyone can see that Dr. Alpay is driven by a lifelong passion for materials science and engineering. But he is equally motivated by the rewarding experience of working with young minds, and seeks creative and exciting new ways to teach and learn.

Enthusiasm for the science is required when there are so many materials to research and products to develop. Among Dr. Alpay’s most current collaborative efforts is a project for UTAS (United Technologies Corp. Aerospace Systems) to help develop novel aluminum (Al) alloys, with the help of Associate Professor Rainer Hebert, Director of the Additive Manufacturing Innovation Center (AMIC).

“UTAS is particularly interested in a new generation of alloys that would be additively manufacturable. We are using theoretical tools and materials genomics concepts to do this,” Dr. Alpay says. Also with Dr. Hebert, they are working to understand defect microstructures in titanium (Ti) and what is happening on the surfaces of Ti and Ti-based alloys. This is important because mechanical properties of Ti and its alloys depend strongly on the defects and their concentration.

The third project is an ongoing collaboration with Professor Steven Suib, the Director of IMS and Professor of Chemistry, on the development of better catalysts. “We are using first-principles based methods in describing surface reactions and in the design of unique catalysts for a number of applications in the field of clean energy,” Dr. Alpay explains.

Until very recently, Dr. Alpay’s research mostly concentrated on the theoretical modeling of functional oxides, but his current interests are more aligned with metallurgy and surface chemistry. “Al alloys are used all over an aircraft – including fuselage and landing gear,” he says. “Furthermore, Ti alloys are used in aerospace applications where high strength at high temperatures are needed. They are also employed in medical devices and orthopaedic joint replacements.”

Dr. Alpay conducts research for projects with several colleagues from the MSE department including Drs. Serge Nakhmanson, Rainer Hebert, Bryan Huey, and George Rossetti, with whom they share a lab. “For many years, I had the pleasure of working with Professor Mark Aindow on several projects, including very recently one from GE (General Electric) on the development of new materials residential circuit breakers,” Dr. Alpay says. “I get to collaborate with excellent colleagues in our department.”

He maintains a joint appointment with the Physics Department and enjoys teaming up with several faculty in Physics, including Assistant Professor Jason Hancock and Professor Barry Wells. Alpay says: “I also work very closely with Steven Suib on surface chemistry and catalysis.”

Though Dr. Alpay always found engineering interesting and excelled at math and physics, he was first introduced to materials engineering by his aunt and uncle. “Both were accomplished mechanical engineers working in metal processing,” he explains. “My aunt would talk about the steel plant she was working in, blast furnaces, metal casting, and the ‘new’ field of metallurgy and materials engineering.” 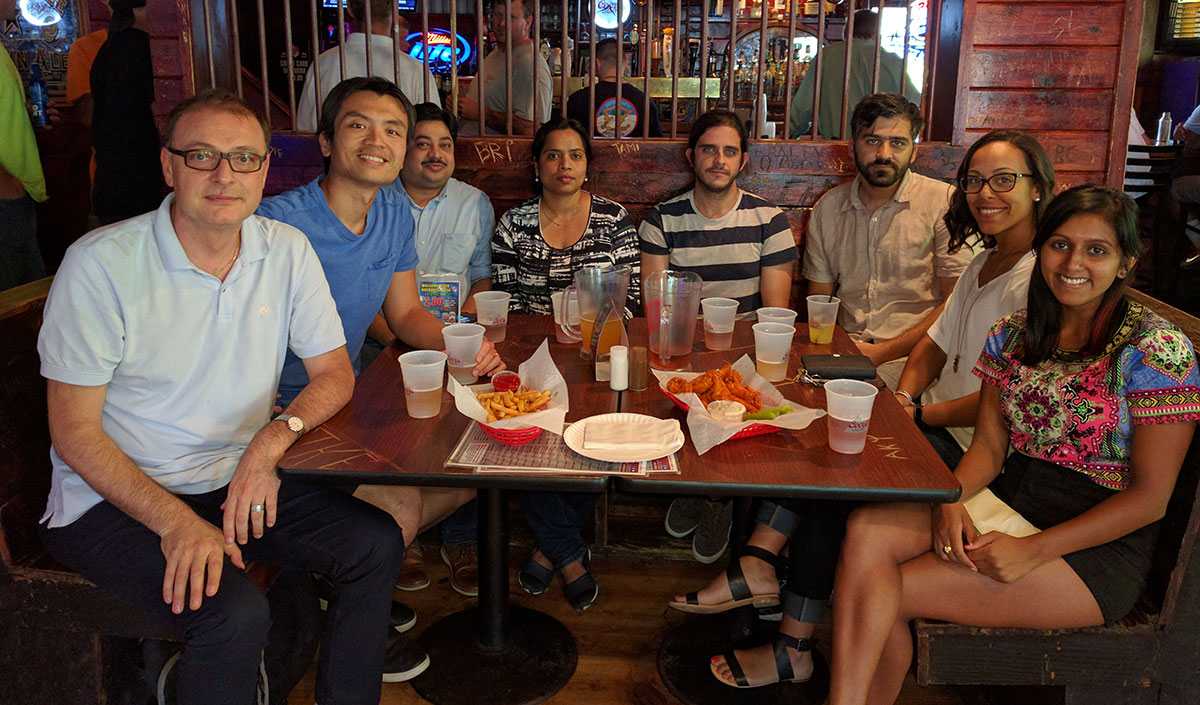 Dr. Alpay received his Ph.D. in Materials Science and Engineering in 1999 from the University of Maryland, where he studied the physics of ferroelectric thin films, and remained a post-doctoral research associate at the Materials Research Center at the University of Maryland until 2001. The researchers who inspired Dr. Alpay were Professor Ramamoorthy Ramesh (Member of National Academy of Engineering), now at UC Berkeley; Professor Manfred Wuttig, and his Ph.D. advisor Professor Alexander Roytburd. “Alec and Ramesh have been an inspiration for me and steered me towards a career in academia. I owe a lot to them,” Dr. Alpay says.

As an undergraduate and a Master’s student, Dr. Alpay was mentored by notable engineering researchers such as Professor Sakir Bor, who recently passed away, and Professor Riza Gurbuz, both of the Middle East Technical University (METU). Since joining UConn in 2001, Dr. Alpay has been an invaluable leader, educator, and researcher, contributing a depth of knowledge and guidance to better the MSE Department.

When MSE became an independent Department again in 2012, Dr. Alpay, then a Program Director of MSE in the combined Department of Chemical, Materials, and Biomolecular Engineering, was nominated by his peers to lead the new MSE Department. His goals for the department have focused on increasing the undergraduate and graduate student enrollment and to strengthen ties with Connecticut industry. Dr. Alpay was named last year the Director of the UTAS Center for Advanced Materials, which opened in collaboration with UConn to advance materials research in MSE and IMS.

However, it is his work with young minds that really gives his career meaning. “I really enjoy mentoring and advising students. That’s the reason I am in academics, to work with young minds on new materials systems, concepts, and their applications,” he says. “In terms of research, my graduate students are my colleagues and co-workers. We are a team.” It is clear how much he enjoys teaching, as he was elected MSE’s Teacher of the Year and UConn School of Engineering Outstanding Faculty Advisor in 2013. He is an elected Fellow of the American Physics Society Award and a Member of the Connecticut Academy of Sciences and Engineering.