MSE Congratulates Haibo Yu as Graduate Student of the Year 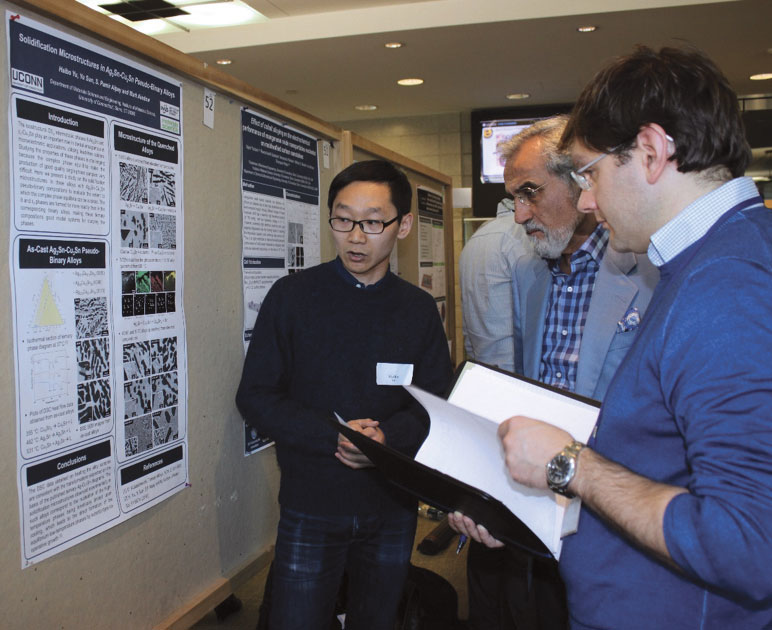 Among the considerations for the Graduate Student of the Year are research, academic performance, professional service and outreach, and public speaking via the student seminar contest, held in February this year.

“Haibo impressed us with his collection of first author and supporting author publications, high GPA at UConn, and clear presentation during the speaking contest,” says Dr. Bryan Huey, Director of MSE Graduate Studies. “He was selected from several outstanding candidates who have all been remarkably active while at UConn. We expect they will all be very successful in their future endeavors.”

Haibo earned his BE in Materials Physics and ME in Materials Science and Engineering at the University of Science and Technology, Beijing, where he studied from 2005 to 2012. In Beijing, he worked on microwave absorption properties of tetrapod-shaped ZnO nano structures and on carbonyl iron composite coatings.

After completing his M.E. in MSE, Haibo joined the Aindow group in 2012 and is now in the final stages of his Ph.D. At UConn, his research is focused on metallic alloys and metal/ceramic composites for electrical circuit breaker contacts.

“I believe that Haibo’s success as a student stems from his strong background in both the science and engineering aspects of our discipline,” says Professor Aindow. “This enabled him to make significant contributions in diverse facets of his research project. For instance, Haibo has developed a practical understanding of the materials degradation processes involved in more empirical engineering acceptance tests for circuit breakers. He is also completing fundamental work on the defects and deformation mechanisms in Ag3Sn, which helps to explain the unusual deformation behavior in this intermetallic compound.”

“Haibo is also recognized as a true team player who will make the time to help other students no matter how busy he may be with his own research. It has truly been a pleasure to advise such a talented, dedicated and personable graduate student, and I am delighted that Haibo’s achievements and contributions have been recognized by his selection as Graduate Student of the Year for 2017,” says Professor Aindow.