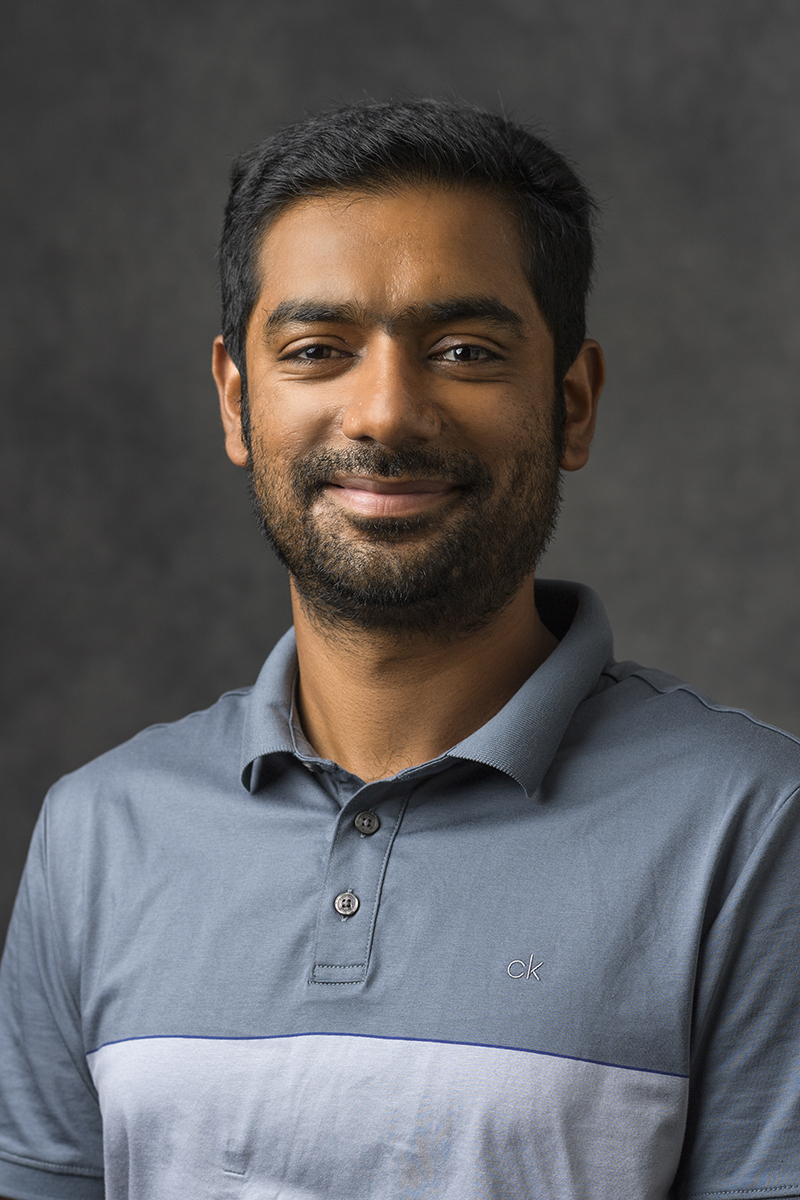 It would suffice to say for UConn’s Materials Science and Engineering (MSE) alumnus Arun Kumar Mannodi Kanakkithodi, MSE found him rather than the other way around.

Growing up in India, Kanakkithodi knew he wanted to pursue a discipline related to physics and chemistry. Before graduating high school, he took exams which placed him in a bachelor program. He was placed in the materials engineering program at one the country’s most prestigious colleges, the Indian Institute of Technology Roorkee.

After graduating with his bachelor’s in 2012, Kanakkithodi was unsure of what his next step would be. Then, something happened, which he says, changed the course of his life, putting him directly on the path he’s on now.

Kanakkithodi was half-heartedly submitting graduate school applications during his senior year when he came across an advertisement in his current department, encouraging students to apply for UConn MSE. The ad was made by Professor Rampi Ramprasad (formerly of UConn MSE and now a professor at Georgia Tech) and Ghanshyam Pilania (formerly an undergrad at Kanakkithodi’s alma mater in India and grad student at UConn, and now a scientist at Los Alamos).

According to Kanakkithodi, his future seemed clear after meeting with Ramprasad and Pilania on Zoom.

“I decided that all I wanted to do in life was to join this basketball-crazy university in New England and do computational materials science research for Professor Ramprasad and his group. The rest, as they say, is history,” he says.

According to Kanakkithodi, Professor Ramprasad became an influential mentor to him as his PhD advisor. Aside from just the recruiting advertisement, Ramprasad had a lot to do with Kanakkithodi’s career.

“He made me a better scientific writer and overall, a more confident researcher and person,” Kanakkithodi says.

After earning his PhD in 2017, Kanakkithodi worked and studied as a postdoctoral researcher at Argonne National Laboratory for a few years. According to him, his postdoctoral work helped him grow comfortably independent as a researcher. During this time, he received an Outstanding Postdoctoral Performances Award as well as a Distinguished Young Investigator Award for his research.

Following his postdoctoral research, Kannakkithodi searched for jobs within industry companies and labs. However, after applying to a few, he realized moving outside the realm of university research was not the right direction.

“What I really wanted to do is become an academic, set up my own research laboratory, and train students in order to develop future generations of materials researchers,” he says.

This realization is what brought him to become an assistant professor (on track for tenure) at Purdue University to teach MSE in January of 2021.

This period of uncertainty leading up to his career at Purdue turned out to be a valuable lesson. According to him, no one really knows where they truly want to be in their careers until after they have done some exploration.

“I believe everyone needs to go through this journey where they gradually figure out where they fit in best. I now have no doubt in my mind that an MSE faculty position is what was right for me,” he says.

Additionally, it has been a theme in his life that guidance from professors and supervisors have given him the push he needed to confidently take the next step in his career.

Kanakkithodi says owes a debt of gratitude to his postdoctoral supervisor at Argonne, Maria Chan, for propelling him towards becoming a PI (principal investigator). These leadership skills lent to his passion in his current work.

He now teaches different core introduction courses at the Purdue MSE department. In the spring, he taught “Intro to Materials Modeling”, a class which he particularly enjoyed because it is close to his research interests.

According to him, Kanakkithodi loves teaching and mentoring students, but the most rewarding aspect of the job is the research.

“I love conceptualizing a research problem and working on it as part of a team, and ultimately disseminating the results and scientific publications and tools for the community. I enjoy writing manuscripts and interacting with collaborators from across the world,” he says.

His research group focuses on accelerating the design of novel materials for energy applications using first principles modeling, data science, and machine learning. According to Kanakkithodi, the group is currently working on compositional, structural, and defect-engineering of semiconductors for improved performance in solar cells and related applications.

In his research group and classes, Kanakkithodi’s teaching philosophy has been guided by his own experience as a student.

“I have absolutely tried to incorporate certain styles from my favorite professors at UConn, including Professor Ramprasad, Rossetti and Dongare, into my classes at Purdue. It is not easy to succinctly explain concepts to students from varying backgrounds, and I learned from the best as to what I should and should not be doing. Rampi’s electronic structure theory course and Avi’s materials modeling course were especially illuminating to me about the best teaching styles to adopt,” he says.

During the pandemic, it was harder for him to apply his teaching philosophy. As a first year teacher during that time, Kanakkithodi was just getting adjusted to being a professor in the traditional sense. It was difficult to suddenly have to teach in a style, new to even the most experienced professors.

Despite the uncertainty experienced by professors and students because of the pandemic, Kanokkithodi says confidently that MSE students are in an excellent place for research and future career prospects. Even during atypical times like the pandemic, they should make full use of every opportunity or faculty at their disposal, he says. Additionally, he emphasizes the importance of diversifying students’ research exposure.

“Interact with research groups and professors whose work is quite different from yours. This is a great way of learning something new and discovering an interest you may not have realized you had,” he says.

He says, especially for PhD students interested in becoming an MSE professor, they should seek insight from their own advisors and professors.

“You would have no better resource than them and nobody to have your back like they do,” he says.

Additionally, he tells PhD students interested in becoming an educator to “read as much scientific literature as you can in your areas of interest and start jotting down research ideas when you have them. Towards the end of your PhD, you should start looking at what kind of faculty openings are available and start planning your applications.”

Kanokkithodi recently spoke as an MRS panelist in a webinar event about applying to faculty positions in which he went more in depth about his own experience and provided advice for others.

Along with his presence at the MRS panel, he has been recognized for his work through several awards. He received an Outstanding Postdoctoral Performances award, a Distinguished Young Investigator award from Argonne and the Materials Research Society’s Graduate Student Silver award, at a fall conference. His research has led to invitations for delivering talks at conferences, such as MRS spring 2022 and MS&T 2021, and general seminars and workshops at Purdue and Argonne.

Though it has only been a little over a year since he began his career as a professor, Kanokkithodi says he is confident he will continue on the faculty path until he is a tenured professor.