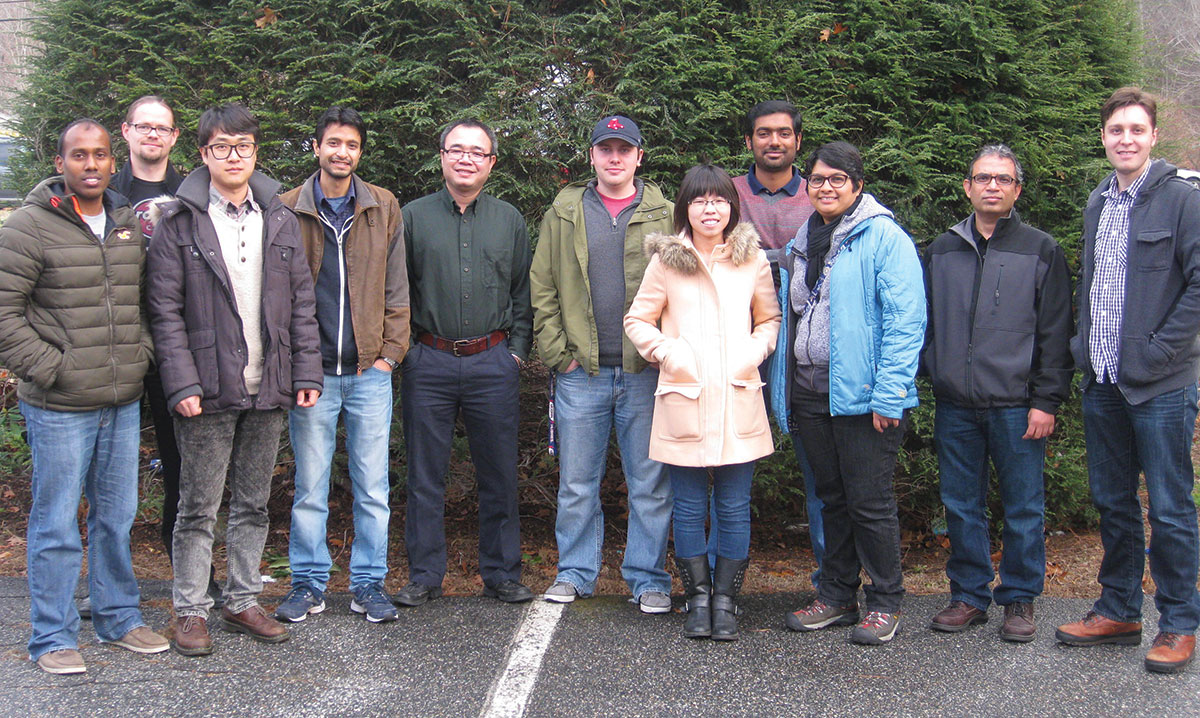 Recently, there has been some interesting activity in Professor Rampi Ramprasad’s lab. As a computational materials scientist, Professor Ramprasad and his group members — composed of graduate students and post-doctoral researchers — are involved in computation-guided materials discovery.

The Ramprasad group studies materials on the computer—virtually—using fundamental theories such as quantum mechanics and data-driven methods such as machine learning. These methods accelerate significantly the design and discovery of new application-specific materials by virtually screening thousands of new materials even before they are actually made, and provide guidance for the specific types of materials that should be made and tested. This type of activity, which would have been viewed as “science fiction” just a few decades ago, is rapidly becoming a prominent sub-field of materials science here at UConn and around the world.

A recent highlight of Professor Ramprasad’s research relates to his work on polymer insulators for electrostatic energy storage. The Office of Naval Research, through the Multidisciplinary University Research Initiative (MURI), funded this work. Along with his colleagues, Professor Greg Sotzing (a synthetic chemist) and Professor Yang Cao (an electrical engineer), his current graduate students Arun Mannodi-Kanakkithodi and Lihua Chen, his current post-docs Dr. Huan Tran and Dr. Chiho Kim, and many other present and past group members of his and his colleagues’ teams, Professor Ramprasad has been able to show how quantum mechanics based computations can truly drive and transform the discovery of new materials.

“We have come up with several new polymers which did not exist before but appear to be very suitable and very promising for capacitor-based energy storage applications,” Professor Ramprasad explains. Their work has been recently summarized in articles in Advanced Materials, under the title “Rational Co-Design of Polymer Dielectrics for Energy Storage”, and in Progress in Materials Science, under the title “Advanced Polymer Dielectrics for High Energy Density Applications”.

The MURI project is aligned with the White House Materials Genome Initiative (MGI) launched by President Obama in 2011 “to help businesses discover, develop, and deploy new materials twice as fast.”

Professor Ramprasad attended the 5-year anniversary event of the MGI at the White House in August 2016, in which several MGI accomplishments were highlighted, including the UConn-lead MURI effort. “It is an honor to be a part of our polymer discovery effort,” Professor Ramprasad says. For him, the MURI project has been an extraordinary learning experience, providing an in-depth view of the many aspects and challenges involved in the path from fundamental science, to validation, to real-world applications.

A new addition to his computational toolkit arsenal is “machine learning,” a branch of artificial intelligence that is concerned with how we can create a computer system that can automatically and progressively learn and improve through experience. “Within the context of materials science, such a paradigm can help transform the discovery process, and make it far more efficient, by using available materials data and new data that can be intentionally created in a careful manner, e.g., using quantum mechanics,” Professor Ramprasad explains.

While quantum mechanics is very powerful, robust and accurate, it is very computationally expensive. Machine learning can efficiently “interpolate” between the results of quantum mechanics; quantum mechanics and machine learning can lead to expert materials recommendation systems. One such system to efficiently explore the polymer genome and design suitable polymer materials is available at khazana.uconn.edu, thanks to the efforts of Dr. Chiho Kim, Dr. Huan Tran and Arun Mannodi-Kanakkithodi. A recent article in Reviews in Computational Chemistry, titled “Machine Learning in Materials Science: Recent Progress and Emerging Applications,” discusses how data-centric learning tools can make materials exploration more efficient.

Professor Ramprasad believes that the basic notions and philosophy underlying machine learning have enormous implications for several aspects of materials science. For instance, along with his graduate students James Chapman and Rohit Batra, post-doc Dr. Huan Tran and several others in his group, he is investigating how a computer system may be trained to learn from itself and its own experiences during the course of a quantum mechanics based materials simulation. This has lead to a new family of machine learning “force fields” that could lead to materials simulations at quantum mechanical accuracy but 6-8 orders of magnitude faster. Along with post-doc Dr. Chiho Kim, Professor Ramprasad is exploring ways to mine materials data for laws, guidelines and rules, which can improve intuition about materials enormously. Their recent work was published in Chemistry of Materials, titled “From Organized High-throughput Data to Phenomenological Theory: The Example of Dielectric Breakdown.”

It’s been a busy year for Professor Ramprasad. Another new project he is working on deals with the unusual behavior of a well-known material, hafnium dioxide (or HfO2). Under certain conditions, this material displays switchable electrical polarization, i.e., ferroelectricity—the electrical analog of ferromagnetism. Along with his colleague Professor George Rossetti, graduate student Rohit Batra, post-doc Dr. Huan Tran, and Professor Jacob Jones, a collaborator at the North Carolina State University, Professor Ramprasad is currently trying to explain how and under what circumstances hafnium dioxide may display this surprising behavior.

“It was a puzzle as to why this material should display ferroelectricity because you don’t expect it based on what was known previously about this material. Electronic devices based on hafnium dioxide in this new polar state can transform how we store information in a computer,” Professor Ramprasad explains.

When asked why he chose an academic job, Professor Ramprasad said that the freedom to pursue academic research, the opportunity to work with students, and teaching lured him to his current occupation.

While Dr. Ramprasad thinks that academia is the right place for him, he nonetheless values the time he spent at Motorola. “It made me more flexible and adaptable,” he explains.  He also gained a perspective on the connection between research and real-world applications.  “For the most part, I think science should be useful to society.” All of these things, he says, contributed to his success in academia. Likewise he encourages his students to develop a big picture with regard to their research and to be able to communicate beyond the academic level.

His dedication to academia and shared learning is evident. In the classroom, he experiments with non-traditional modes of teaching, by arranging scientific debates and quiz contests and “flipping” the classroom. His research too is somewhat non-traditional, and operates at the crossroads of disciplines. His collaborations are diverse and cut across disciplinary, institutional and national boundaries. Professor Ramprasad says that modern academic research has evolved into an interdisciplinary group effort. He believes that he is personally a beneficiary of this cooperation-based research landscape.

Professor Ramprasad derives great pleasure from working with his students and post-docs, inspiring them and being inspired by them. “A lot of the exciting contributions we are able to make are because of the talented group members that I’ve had in my projects. I am fortunate to have (had) a passionate set of students and post-docs in my group,” Professor Ramprasad said.

Professor Ramprasad is a Fellow of the American Physical Society and an elected member of the Connecticut Academy of Science and Engineering. He is the recipient of the Alexander von Humboldt Fellowship, the Max Planck Society Fellowship for Distinguished Scientists, the United Technologies Corporation Professorship for Engineering Innovation, and most recently, the UConn Centennial Term Professorship.