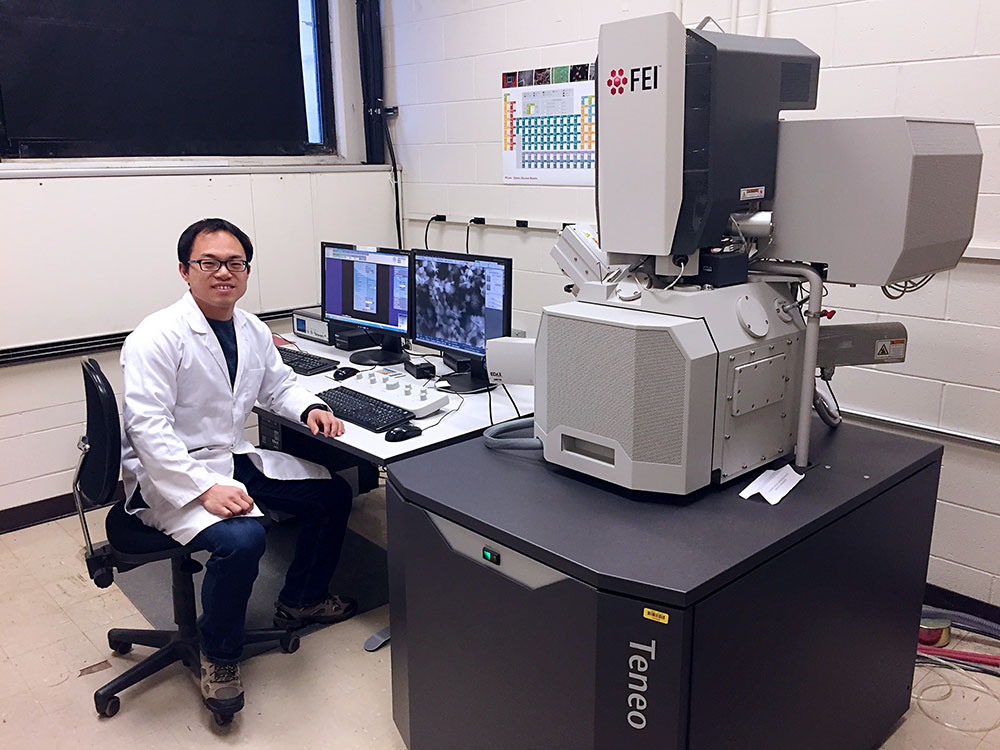 Xingxu Lu at the console of the FEI/Thermo Fisher Scientific Teneo SEM in the Center for Advanced Microscopy and Materials Analysis. With this tool, particle size, morphology and chemistry can be studied at the sub-micrometer scale.

The student chapter of the Materials Research Society recently announced Xingxu Lu, a second-year graduate student in Professor Pu-Xian Gao’s research group, as the winner of the Graduate Student Speaker Contest. The award recognizes his presentation entitled “Microwave-assisted Hydrothermal Synthesis and Manufacturing of TiO2 Nano-array Integrated Catalytic Converters,” as judged by a panel of students.

In his talk, Xingxu reported a microwave-assisted hydrothermal method, which involves the synthesis and manufacturing of TiO2 nano-arrays rooted to honeycomb monoliths for high performance automotive catalytic converters with mechanical and hydrothermal stability. Xingxu claimed that his research approach opened a new door for low-temperature scalable synthesis and the manufacturing of TiO2 nano-array integrated catalytic reactors with decent production rates and increased material utilization efficiency. Ultimately, he believes that these nano-array integrated catalytic converters could function well as low-temperature automotive emission control devices.

Before Xingxu Lu began his research at UConn, he had been experimenting with alloy phase diagrams at the Central South University in P.R., China, where he received his Bachelor’s and Master’s Degrees in materials science and engineering. His desire for new research led him to UConn, where he now studies heterogeneous nanocatalysts in Professor Gao’s research group. Xingxu believes this kind of research can aid in understanding reaction mechanisms, modifying materials and improving the performance of catalysts.

According to Xingxu’s Advisor, Professor Gao, “Xingxu has done a very good job in his graduate research and continues to display self-drive, quality and consistency in his work. He will only get better down the road.”

Xingxu is devoted to exploring the scientific world and in the future aspires to become a professor.