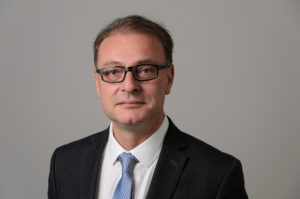 The UConn Board of Trustees recently appointed MSE Professor Pamir Alpay as the General Electric (GE) Endowed Professor in Advanced Manufacturing. He received his Ph.D. in 1999 from the University of Maryland. Dr. Alpay joined UConn’s Materials Science and Engineering (MSE) in 2001 and from 2013 to 2017 he served as the Head of the Department. Dr. Alpay is presently the Executive Director of UConn Tech Park, leading efforts to increase strategic partnerships with businesses of all sizes at this unmatched, state-of-the-art research and development facility.

Dr. Alpay’s research is primarily focused in the areas of functional materials, metallurgy and materials modeling. In particular, Dr. Alpay and his students have laid much of the critical theoretical ground work relative to high performance materials that directly impact product process and functionality, including:

Prof. Alpay’s research employs a palette of theoretical tools ranging from ab initio computations, to basic thermodynamic models for the determination of property predictors, to their integration into commercial modeling packages so as to ease technical transfer and model adoption by his industrial collaborators. Thanks to his successful collaborations and innovations in use by industrial partners, Dr. Alpay has been recognized as the General Electric Endowed Professor in Advanced Manufacturing.

Dr. Alpay is an elected member of the Connecticut Academy of Science and Engineering (CASE) and is a Fellow of the American Physical Society (APS). He is the winner/recipient of several awards including the NSF CAREER grant in 2001, the UConn School of Engineering Outstanding Junior Faculty Award in 2004, UConn School of Engineering Outstanding Faculty Advisor Award in 2013, and the UConn Department of Materials Science and Engineering Teacher of the Year Award in 2013. Dr. Alpay has ~190 peer-reviewed journal publications and conference proceedings, four invited book chapters, and an invited book co-authored on compositionally graded ferroelectric materials.