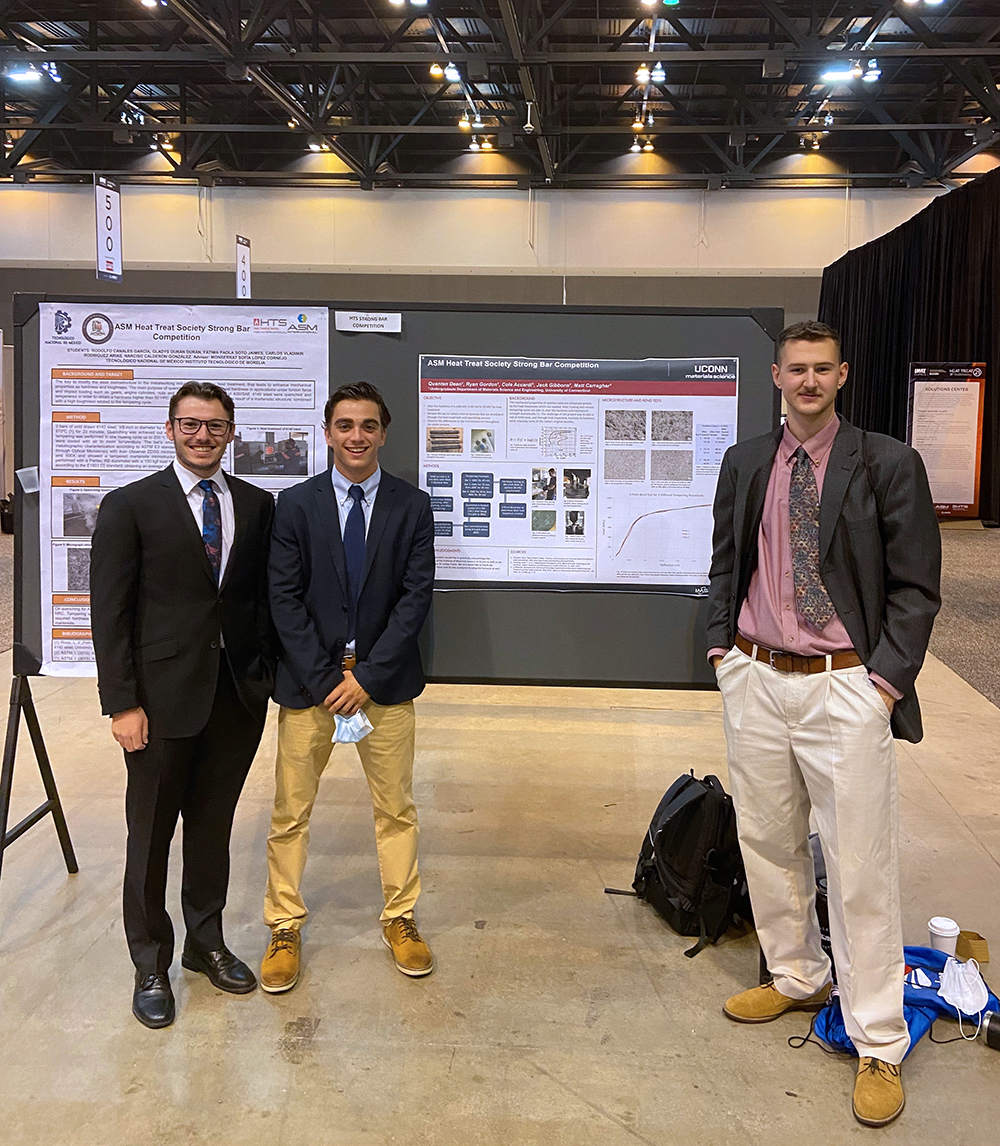 Dean’s group in front of their project at the Heat Treat Society Conference. From left to right: Ryan Gordon, Cole Accord, and Quenten Dean.

Two MSE students made it to semi-finals at the 31st Heat Treat Contest which took place Sept. 14 and 15 in St. Louis. This year, the student/emerging professional portion of the conference hosted the Fluxtrol Student Competition and the new ASM Heat Treating Society Strong Bar Student Competition.

The Heat Treating Society as a whole serves professional and aspiring material engineers who work in thermal processing. The annual competition offers awards and widespread recognition to young innovative scientists. Through this, the program seeks to encourage the participation of younger generations in the ASM Heat Treating Society. It also provides a pipeline to worldwide opportunities in the thermal processing community.

Recent MSE graduate Brittany Nelson and MSE senior Ryan Gordon were the two participants from UConn who made it to the semi-final round of the Fluxtrol Student Research Contest. “Unfortunately, they did not make it to the final winner slot, but everyone did a great job and they had some steep competition,” their faculty advisor, MSE Assistant Professor Lesley Frame, says. Frame currently serves as the first female Vice President of the Heat Treat Society.

Quenten Dean, the student group leader, was one of the three undergraduate students who attended the competition. His group also included Ryan Gordon, Cole Accord, Matthew Carragher, and Jack Gibbons. According to him, the contest he participated in was to see who could make the most ductile metal bar with the highest applied load. This was tested by performing a three-point bend test.

“We prepared by first researching as much as we could the best ways to heat treat this bar to get the desired properties while also meeting the hardness requirement,” Dean says. After this, the team received their bars from Professor Frame and with only a week left, were able to quench, temper, and test.

According to Dean, the team had a few problems during their competition setup because the equipment hadn’t been calibrated in a long time. The biggest problem was that their oven failed to display an accurate temperature. Because of this, it was difficult to harden the samples.

However, the team did not let these difficulties hold them back. “We had to use our best guess and play it on the safe side for our hardness and not go too soft,” Dean says. Ultimately, he says the team received great results in terms of the amount of martensite produced by tempering the bars.

It was at the conference that the team finally got to see their work put to the test. Dean says that though they didn’t achieve the highest load, he was proud of their results.