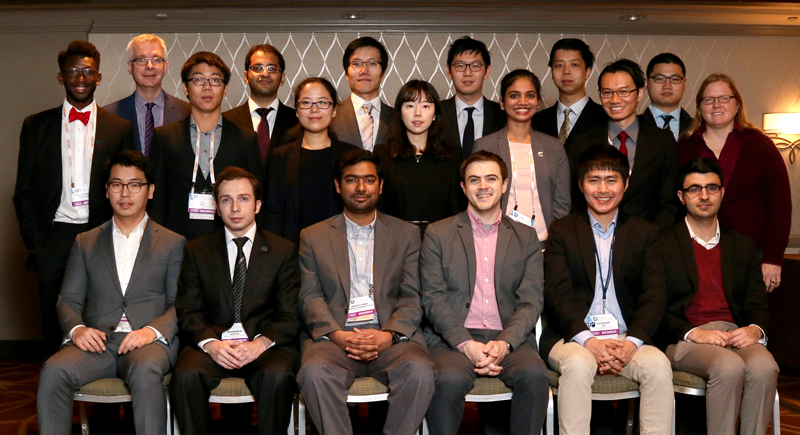 Arun received the MRS Graduate Student Silver Award  for his thesis work titled “Rational Design of Polymer Dielectrics via First Principles Computations and Machine Learning,” for which he used quantum mechanics based density functional theory (DFT) computations to study the structural, electronic and dielectric properties of many novel and existing polymers. “We identified several promising dielectric polymer candidates for energy storage capacitor applications, which were synthesized and characterized by our experimental collaborators Professor Greg Sotzing and Professor Yang Cao of the Polymer Program at UConn IMS.

The process led to the “rational co-design” of new polymer dielectrics, proving that computations and experiments can be used synergistically to efficiently design new and advanced materials. The research is part of the Multi-University Research Initiative (MURI) funded by the Office of Naval Research (ONR), for which Professor Ramprasad was the principal investigator.

Arun collaborated closely with to prior Ph.D. students who graduated from Dr. Ramprasad’s group and a post-doctoral student in his group to carry out the calculations, which we performed on more than a 1000 polymers split amongst the four. “It was only due to this joint effort that we could build a substantial and diverse computational polymer database,” Arun explains.

“The MRS Graduate Student Gold and Silver awards are among the most prestigious student awards given by any society in USA. Winning this award means a lot to me, and I believe it is a culmination of all the good polymer dielectrics research I performed in collaboration with post-docs in our groups and experimentalists in our department,” he says.

This award recognizes Arun’s authorship of an abstract submitted for presentation or for a poster presentation for the MRS meeting. Meanwhile, Keith presented a new class of superelastic materials that have a ThCr2Si2-type structure and exhibit superelastic and shape memory behaviors by an atypical mechanism. After John discovered the material two years ago, he, Keith, and Dr. Lee—also the MRS chapter advisor—have been investigating it the past two years, working together on the research. At the MRS meeting, Keith explained their mechanical characterization of two materials from this class of intermetallics, CaFe2As2 and LaRu2P2, both which exhibited superelastic behavior.

“Upon deformation, these materials undergo a structural collapse along the c-axis which introduces bonding between adjacent layers of the ‘Si-type” element,’” Keith explains. “This deformation induced structural change by bond making and breaking is reversible and is what accounts for the large amount of recoverable elastic strain.”

Research into these materials, which can exhibit shape memory effects below 50K and exhibit cryogenic actuation properties, is currently supported by NASA, and was further acknowledged in conjunction with Dr. Lee’s ECF award earlier this year.