MSE PhD Student Reflects on Industry Internship Across the World 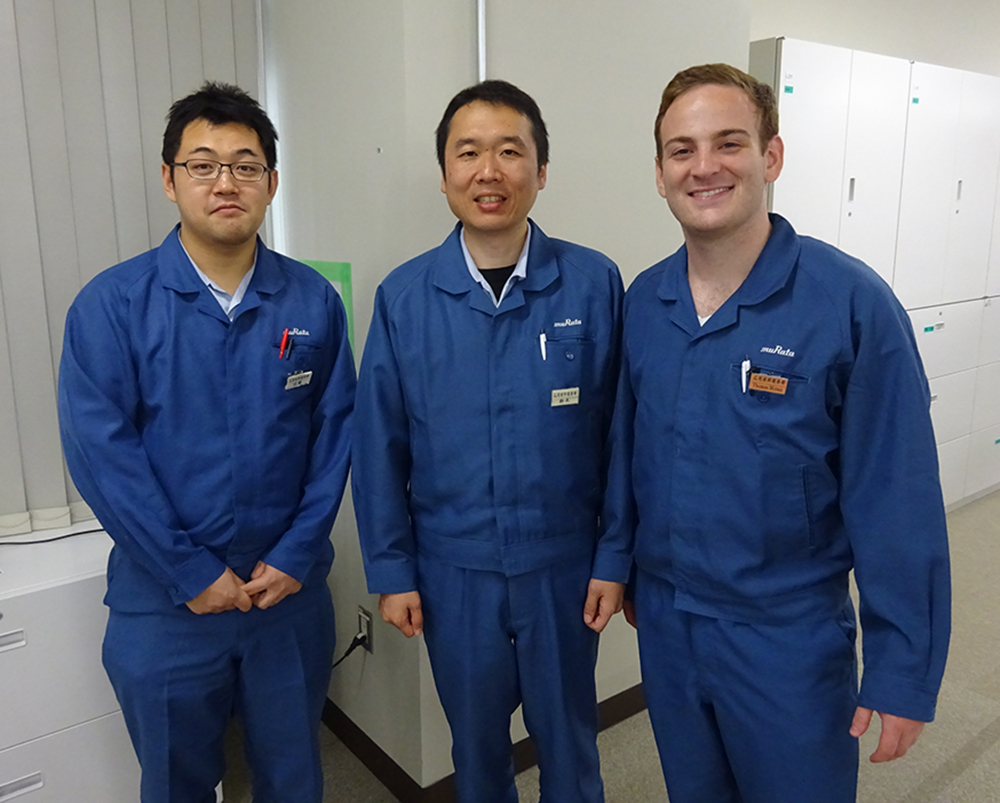 During his graduate research, Materials Science and Engineering PhD student Thomas Moran stepped out of his comfort zone and into the eastern hemisphere when he decided to pursue professional industry experience in Japan. With the help of his advisor, Department Head Bryan Huey, Moran was able to join the Japanese electronics manufacturer Murata as a Research and Development Intern.

Moran received his bachelor’s degree in mechanical engineering from Union College in 2016. He realized his interest in materials science during this time. “I got involved in undergraduate research that dealt with materials, and by the time the research was ramping up, I took a Junior-level materials science course and from there I was hooked,” he says. He ended up pursuing a self-designed interdisciplinary minor which enabled him to focus his research on solar cell materials using atomic force microscopy (AFM).

Moran enjoyed his studies related to materials science so much that he decided graduate school was the next step. “I was pretty sure I wanted to pursue MSE, but while I had some research experience, I didn’t have a whole lot of coursework past the basics,” Moran says.

In 2016, he chose to officially continue his education at UConn. “I liked the industry connections, and the focus I saw being put on the MSE program,” he says. “I met Bryan on my accepted students’ visit, and with the combination of shared research interests and my experience with AFM as an undergrad, joining his group was a natural next step,” Moran said.

Since joining the group, Moran has been led by Huey with what he calls a perfect balance between a hands-on and hands-off approach. “He has found a way to be actively involved while not overbearing, and affords us the freedom to conduct lab operations as we see fit so long as we continue to produce results,” Moran says. Through his mentorship style and every other impact, Moran says that he considers himself very lucky to have found his way into his lab.

According to Moran, some of the most exciting work he has done in Huey’s group has been an ongoing project related to the development of a technique called Tomographic Atomic Force Microscopy (T-AFM). AFM is classically a surface-only technique where a sharp AFM tip touches the sample’s surface to measure nanoscale topography and properties. However, with T-AFM, Moran says it can be extended into the 3rd dimension. It works by using the AFM tip to not only measure properties, but also to simultaneously dig away material. Over time, the subsurface features of the sample are exposed, and the dataset produced during the milling process is used to reconstruct through-thickness properties that are important to the functionality of nanoscale materials.

Using this method, Moran has been able to successfully perform analyses of a number of systems as part of collaborations with several companies and academic institutions. “By doing so, I like to think that I’ve done my part in furthering the reach and standing of UConn MSE and spreading the word about this exciting new technique,” he says.

Aside from this, the ultimate impact could change the nature of modern electronics. “Every cell phone has some 1,000+ capacitors inside it, and every year trillions of these components are made for the electronics we’ve all come to rely on. The number of components on each electronic device continues to multiply as technology advances, and this necessitates a miniaturization of materials into the nanoscale,” Moran says. According to him, this has been a major focus for industry and academia alike, and his research, analyzing phenomena that occur only at extreme scales, is a part of these efforts.

Though this research has been for Huey’s own lab, arguably the most significant opportunity that Huey catalyzed for Moran was his internship with Murata. Moran had already been collaborating with the company, who both funded the research and provided extensive guidance through their dielectric materials development team. It was Huey who influenced Moran to inquire about an internship. “My plan following graduation from UConn has always been to move to industry, and so when I expressed my interest in finding an internship to gain some industry experience, Bryan suggested we ask Murata,” Moran says.

Professor Huey notes, “I personally have had several incredible experiences working with industry, in internships, and in short-term positions abroad, so I and really all my colleagues in MSE try to facilitate similar opportunities whenever possible. This one really came about because of Tom’s hard work, independence, and the professional relationship he had established with our partners at Murata over the preceding few years of joint research. Tom repeatedly impressed them with his insight and hard work, and was a wonderful host when they visited our labs, so it was no surprise that they welcomed him for an extended stay. He came home having learned a great deal and made important contributions as well, both scientifically and personally.”

The work with Murata in Japan was related to their joint project at UConn. “I worked primarily with my colleague Hiroyuki Kondo, using a high vacuum AFM system to study charge injection and dissipation phenomena and compare it to behavior observed at UConn in ambient or inert atmospheres,” Moran says.

According to Moran, he also gained experience with new areas of research learning about the synthesis of the materials, including producing samples himself. “I found this really valuable, as most of the work we do in the Huey group involves studying incredible materials and devices from elsewhere in the world, rather than us producing the materials,” he says.

Aside from the different nature of his research, Moran also was exposed to a new work environment. “It was interesting to see the differences between professional life in the USA and in Japan,” he says. According to him, everyone who works there wears a uniform and there is a much more structured work schedule. Despite being out of his comfort zone in this new environment, Moran says he quickly adapted thanks to his hosts and coworkers. Moran particularly remembers great experiences at restaurants and rock-climbing. “I never felt too overwhelmed, even in such a different environment traveling alone for the first time, and this is no doubt mostly due to my fantastic hosts. Regardless, I feel that I’ve grown in my ability to communicate, and I hope to bring this with me to whatever comes next,” he says.

In particular, Moran spent a lot of time working closely with Dr. Keigo Suzuki, another member of the materials science team and the lead at Murata for the joint work with UConn. Suzuki became someone he also spent time with outside of the lab. According to Moran, his favorite experience in Japan was a trip he took with Suzuki and his family to Aichi prefecture. “After seeing a Japanese baseball game, we went to Keigo’s parents’ house, a traditional Japanese home, where we ate an amazing homemade meal, and brainstormed with his parents and kids how to write my name in Japanese characters,” he says. Later, Suzuki’s father painted the characters in calligraphy, Moran’s most treasured gift from the entire experience.

Though the trip only lasted a few months, the experiences, relationships, and growth that came with them will last Moran a lifetime. “It can be tough to be away from your comfort zone, but take the opportunity to embrace it,” he says.

One of the lasting impacts of his trip materialized in March when Moran’s first first-author research paper was published in the Journal of American Ceramic Society, presenting some of his work with Keigo Suzuki and Murata.

To those who decide to step out of their comfort zone and into an internship, even in another country, Moran suggests learning as much about that local culture as possible—including the language. “People love to talk about their culture and if you express a genuine interest then you can get along with most anyone,” he says. “While I picked up enough phrases to manage on my own in town, Google translate is a truly great invention.”