UConn’s Materials Science and Engineering (MSE) graduate student Sara Pedram is from Iran; a country known for its energy exportation — specifically, oil. Ironically, the dependency much of the world has on her home country’s industry, is one of the forces that drove Pedram to focus her graduate research on renewable energy. 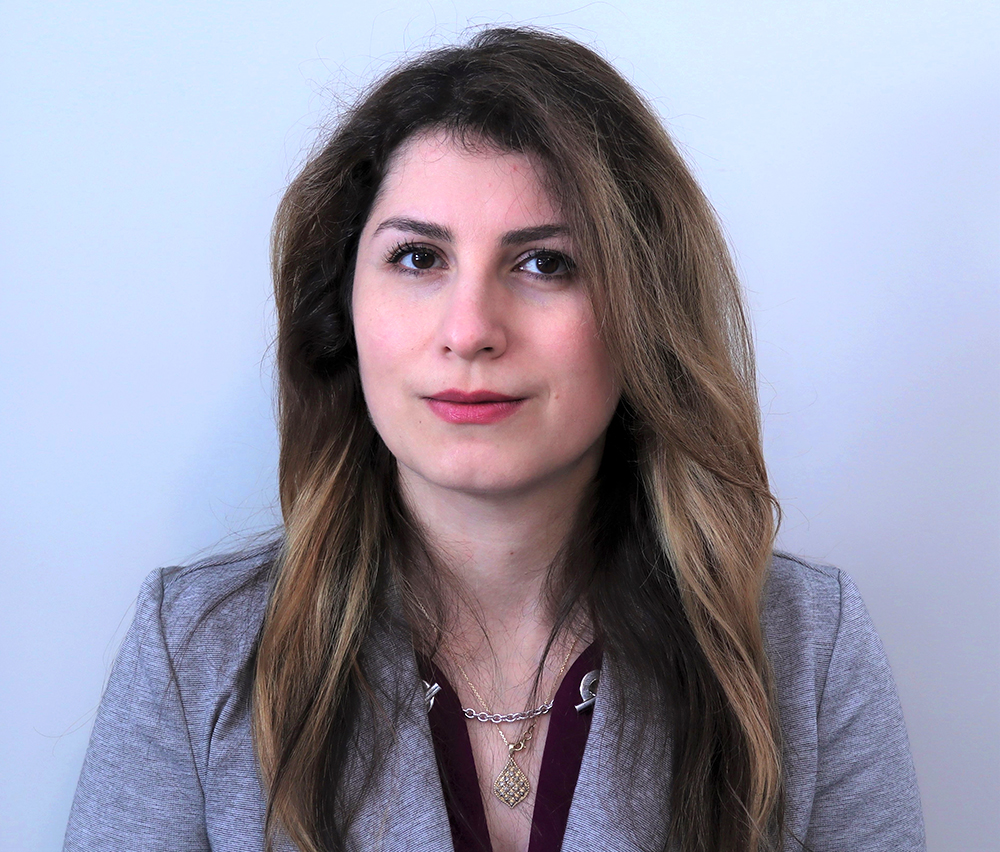 Before Pedram ever started this research, the Iranian oil industry had influenced the direction of her undergraduate studies. “I have always enjoyed and excelled in math and science, and because Iran has a big oil and gas industry, I thought becoming a chemical engineer would be the most sensible career path for me,” she says.

Prior to moving to the United States, she had pursued her bachelor’s and first master’s degrees in Chemical Engineering from Shiraz University and Amirkabir University of Technology, respectively, in Iran. She then worked as a researcher at the Chemistry and Chemical Engineering Research Center of Iran (CCERCI) and at the Pierre and Marie Curie University in France.

It was during this time in France that Pedram thought she might like to travel again. “I became highly interested in continuing to do work in another country,” she says. “The U.S. is a very diverse country with many opportunities for everyone, so I decided to build a career here.”

While the idea of pursuing highly technical studies in three entirely different countries might scare some, it excited Pedram. In 2017, she packed her bags and moved to the United States to begin looking for jobs related to chemical engineering.

However, according to her, it was very difficult to find a job having no previous work experience or degree from the U.S. “This led me to pursue a master’s degree instead. I already had my master’s in Chemical Engineering, so I wanted to study something related to my background but not the same thing,” she says.

Materials science and engineering was something that Pedram says she had become familiar with and interested in during her past research in Iran and France. “It is a highly interdisciplinary field that deals with a number of research areas, and I found it an appropriate area for my long-term career goals. Through my research, I discovered UConn’s MSE program, which is highly-ranked and well-regarded,” she says.

Ultimately, she decided that UConn’s MSE program would be the best choice. “The main things that attracted me to UConn were the Innovation Partnership Building , which is filled with the latest and newest technology, the department’s deeply collaborative nature with industry partners and amongst professors internally, and the outstanding faculty,” she says.

Aside from her hard work, it was through these opportunities and relationships that Pedram says she has become successful since beginning at UConn in 2018. “I have had many opportunities to collaborate with industry partners, which have led to summer internships and good relationships with industry professionals,” she says. One of these professionals is her advisor and mentor, Assistant Professor Jasna Jankovic.

“Professor Jankovic is an extremely supportive and inspiring person, which is one of the main reasons I wanted to join her lab group. I knew that I would not only be working on innovative research but also that Professor Jankovic would emotionally support me,” Pedram says.

“Sara is a very mature, smart and responsible student. She is resourceful and always finds solutions for research challenges. I can rely on her to do everything properly and on time. It is such a pleasure having Sara in my research team.” Professor Jankovic says.

In our modern-day society where almost everything depends on energy, and fossil fuels are exhaustible, Pedram’s work is extremely important. “We must reconsider or innovate our energy sources in order to continue to sustain our civilization for future generations,” she says.

Pedram’s favorite and most recent paper (out of a dozen she has published), “Review on Bio-Inspired PEM Fuel Cells,” was recently published in the Advanced Energy & Sustainability Research Journal and it deals with more on this topic. In the paper, Pedram confronts the climate crisis and addresses the promise and obstacles associated with using PEM fuel cell technology. “It shows how we can design inspiration from nature and implement it into modern-day applications,” she says.

And though fossil fuels can run out, Pedram’s interest in her work doesn’t seem like it will. “Knowing the relationship between the microstructure and properties of materials can allow us to create more useful products with higher efficiency. Using materials characterization techniques to image and visualize from the surface of the material to its atoms is still something that fascinates and inspires me each time,” Pedram says.

During the summer of 2019, Pedram participated in an internship with Giner Inc., a Boston-based electrochemical research and development firm. Professor Jankovic’s group had been collaborating with the company. “It gave me an opportunity to experience an industry environment and see how my research can affect real-life applications, which was really rewarding,” she says.

Pedram is heavily involved with the Center for Clean Energy Engineering, where she conducts her research and where she participated in events to teach high school students the importance of engineering and its role in producing clean energy.

It seems only natural that teaching comes easily to Pedram, as an individual whose unique identity can inspire in so many ways. She has assumed the role of foreigner, immigrant, student, female engineer, environmentalist, and more. The diverse experiences she has embraced have set her up to be successful in many ways.

“Having these experiences in different countries has allowed me the ability to look at problems from many different perspectives. I can solve engineering problems in creative ways because of my exposure to so many research environments. These experiences have also significantly improved my communication and interpersonal skills. When there is a language barrier or culture barrier, you must find other ways to communicate what you want to say effectively,” she says.

Her worldly experiences translate to her research which ultimately works to solve a universal problem: sustainable energy.

Though Pedram says she decided to pursue her masters in hopes of increasing her job opportunities, her goals have shifted. “I initially wanted to get a job immediately after my masters degree, but my experience at MSE and with Dr. Jankovic’s research group has been extremely rewarding and inspired me to continue into a PhD program,” she says. Sara is currently pursuing her PhD studies to develop a novel design for efficient fuel cells, something that she and Dr. Jankovic are hoping to commercialize in the future.