As graduate student Shuyang Xiao prepares to publish his first lead-author paper by the end of this semester, he reflects on the past three years he’s spent navigating his second degree in a foreign country. 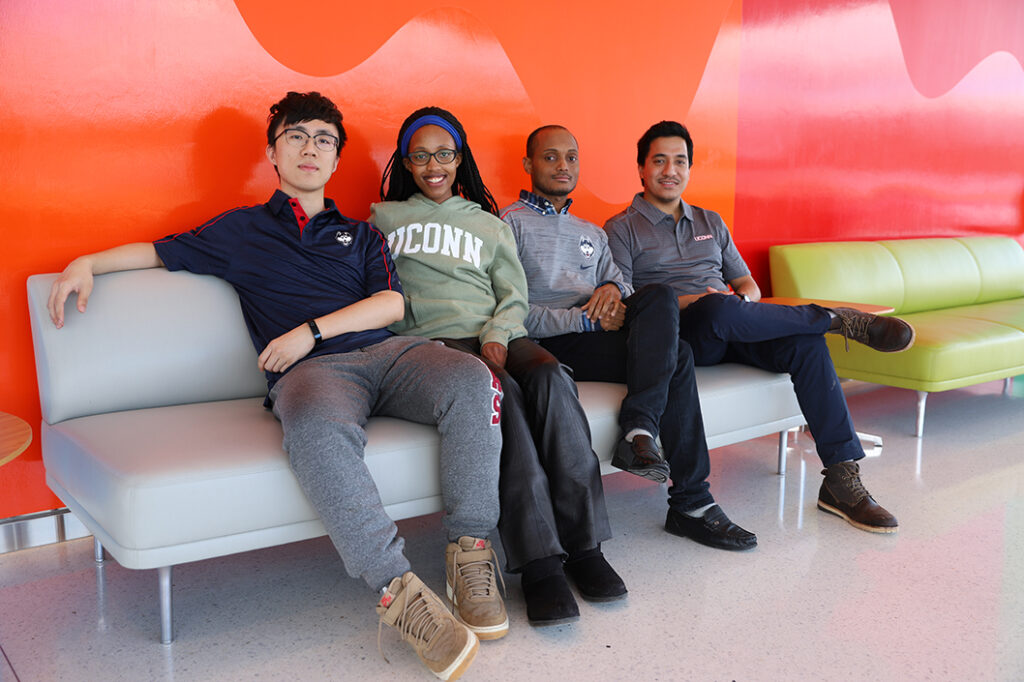 When he graduated in Beijing in 2018, Xiao was not like some of his fellow graduates who were unsure of where they wanted to go next; he had his mind set on traveling all the way across the world to continue his academics. “I first had the thought of pursuing my PhD in the United States when I was a sophomore,” Xiao says.

Xiao began his career in 2014 studying at the University of Science and Technology in Beijing where he received his bachelor’s degree in MSE. When it was time to choose where to go, his decision to travel to Connecticut was not random. “UConn has the better climate, security and diversity compared to all the other universities of the same level. Plus, being away from big cities can help me focus on my research and daily life,” he says.

“Shuyang has a great sense to capture the most important information from his data. So, I always enjoy listening to what he discovers and seeing how his idea contributes to his research project. It is really fun to work with Shuyang,” Dr. Seok-Woo Lee says.

According to Xiao, finding a group to get involved with is especially important for international students. “It’s not easy for students to spend five years pursuing a hard goal like a PhD degree, not to mention that some of us are thousands of miles away from home.”

Department Head Huey notes, “Professor Lee and many of the rest of our faculty had very similar experiences when we were graduate students—exploring far outside what is familiar, both geographically and also culturally. We know the importance of creating an inclusive space for our students no matter where they come from.

And that starts in the lab. While participating in research is typical even for MSE undergraduate students, it is important aside from the degree requirements or professional benefits. Research groups also give students a sense of belonging in a close-knit team. “The lab-group helps to make new friends and learn about other cultures and backgrounds. It helps us get over the inevitable homesickness and have a better connection here,” Xiao says.

Two years later and Xiao is glad he made the choice he did. Xiao says that for the past couple years Dr. Lee has provided him with the certainty and confidence that he is going in the right direction in materials science.

Xiao says it is important for foreign MSE students to “be brave and step outside their comfort zone.” He says he did this when he decided to run for president of the Materials Research Society (MRS). His first year at UConn, Xiao was elected as the group’s president. He currently serves as a senator for the chapter.

Xiao also suggests that foreign students find a hobby unrelated to their studies. “Although it’s really important for us to excel academically, we need something to relax ourselves especially in a rural place like UConn. I personally play guitar and video games and they really help me out when I’m stuck with hard problems,” he says.

When Xiao is not playing guitar, video games, or leading MRS, he works on his research which aims to discover new classes of shape memory materials. This spring, he will lead a publication on this work for the first time.

“Shuyang nearly finished writing his first manuscript which reports a new superelastic material that exhibits probably the largest elastic deformability among all types of crystalline solids. I strongly believe that his ground-breaking results will make a significant contribution to the discovery of new superelastic and shape memory materials. I hope that Shuyang receives a lot of attention from materials research communities once his paper comes out. I think it will happen,” Dr. Seok-Woo Lee says.

Despite his success in forging his own path in the United States, Xiao says he would like to eventually return to China, especially in the current tense circumstances brought on by the pandemic.

“But who knows what will happen in the future,” Xiao says about his career after UConn. “I would love to work in those high-tech companies like Intel, Qualcomm or Apple which really match my skills of micro nanoscale fabrication and mechanical engineering.”

If the right opportunity comes along, Xiao has no fears of following it— just as he did three years ago when he traveled across the world to UConn MSE.