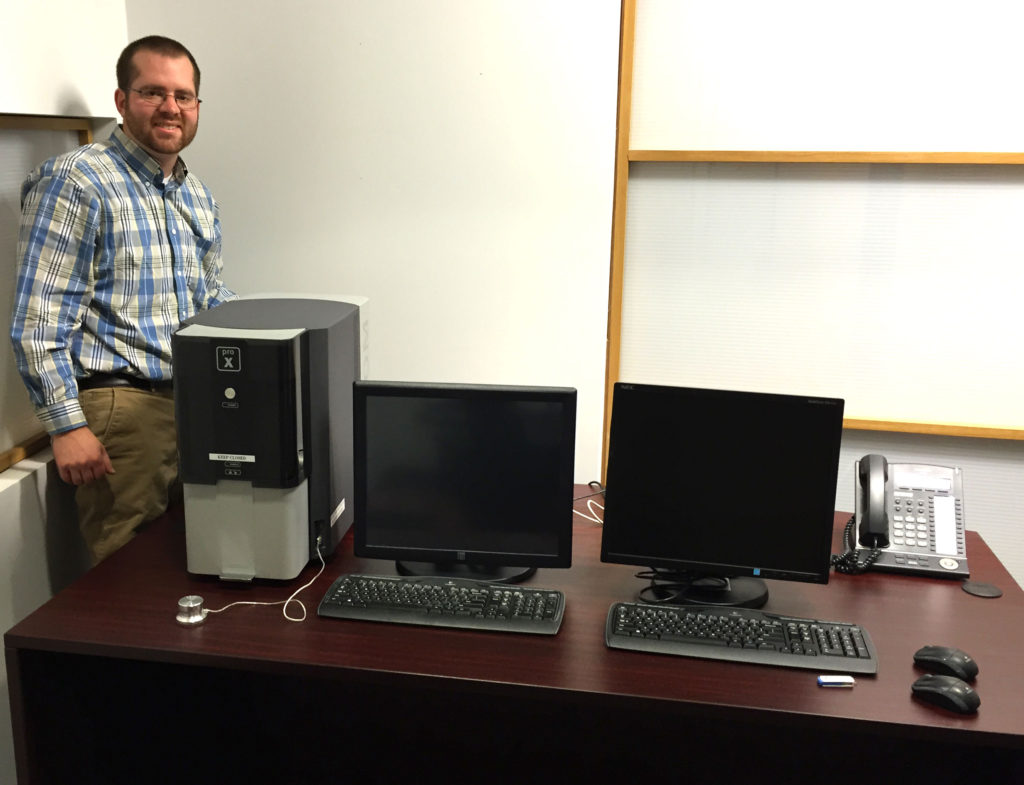 Neal Magdefrau, Ph.D., stands next to one of the desktop SEMs that his company, Electron Microscopy Innovative Technologies, LLC, rents out.

Neal Magdefrau, Materials Science and Engineering alum, was inspired to enter the field to design new materials for golf equipment. Instead, he earned a Ph.D., became a research scientist at one of United States’ premier engineering research companies, and started a business.

“I’ve been at United Technologies Research Center (UTRC) full-time for just over ten years,” Neal says. He currently works as a staff engineer and research scientist in the Measurement Science Group at UTRC, where he’s responsible for running and maintaining the electron microscopy labs. “I started working at UTRC as an undergraduate intern, and then decided to work there full-time after receiving my Master’s degree in 2006.” He continued to pursue his Ph.D. part-time while working at UTRC.

After working in Dr. Mark Aindow’s lab as an undergraduate, Neal wanted to keep working in the lab as a graduate student, with Dr. Aindow as his advisor. His Master’s degree was focused on characterization of amorphous aluminum alloy powders. “At the time, there was a large DARPA (Defense Advanced Research Projects Agency) program called ‘Structural Amorphous Materials’ that we were working on for Pratt & Whitney,” Neal says.

“Most of my work was based on Al-Y-Ni-Gd systems, and while these starting powder materials were predicted to be amorphous, very often we found that during the gas atomization process used to produce the powder, crystallization would occur.” There were also difficulties controlling the heat transfer in the scale up of the extrusion process 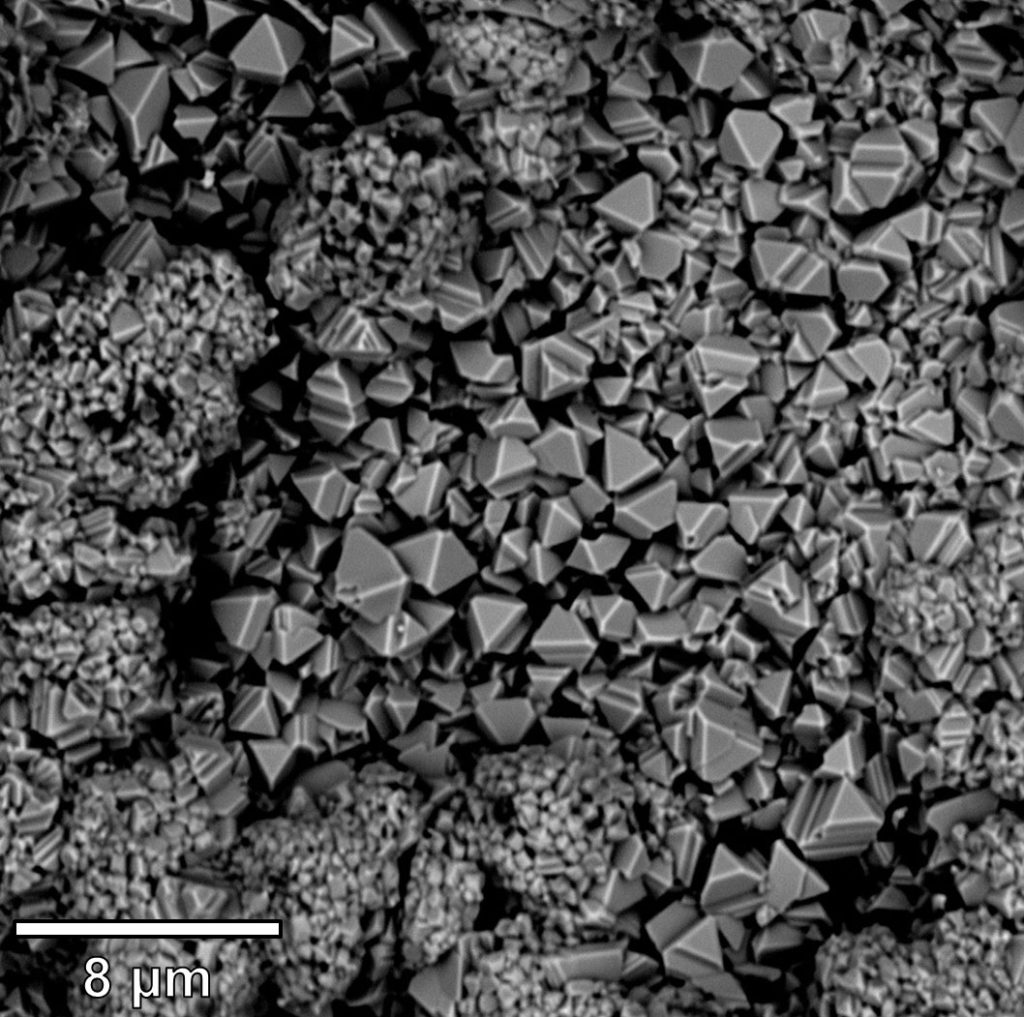 An electron microscope image taken on one of Neal’s desktop SEMs shows an oxidized ferritic stainless steel (what he studied for his Ph.D). The image shows a two-layer Cr2O3/MnCr2O4 oxide scale formed on Crofer 22 after high temperature exposure.

His doctorate work involved high resolution electron microscopy and spectroscopy to understand oxidation and reaction layer products for Solid Oxide Fuel Cell (SOFC) interconnects. “Dr. Aindow and I wrote a DOE proposal that enabled us to generate a set of experiments which gave the SOFC community a more informed picture of what the mechanisms and reactions are that actually limit the life of SOFCs,” he recalls. “In all of my studies, at UConn I was always most interested in how to use the latest characterization tools to study different materials.”

Neal’s desire to study various materials has led him to his current position at UTRC. “My job at UTRC is what I would consider very applied scientific research and often times is also highly proprietary,” he explains. A drawback to the realm of highly proprietary applied scientific research is that the general scientific community outside of UTC does not immediately benefit from his work, or know what research he is doing. That doesn’t make his work any less fulfilling, though. “Any time you’re working on developing a new material that can cut down the weight of a component by a third or improve efficiency there is always a sense that you’re doing something impactful for society.”

Interestingly, Neal initially went into the field of materials science and engineering because of golf. “I’m an avid golfer and I thought it would be great to be able to design new materials for golf equipment,” he says. “I was offered the opportunity to work for Adams Golf, which is one of the major golf companies in the U.S., but ultimately I decided to stay in Connecticut to be closer to friends and family.”

Neal’s company rents out these highly functioning portable tabletop Scanning Electron Microscopes (SEMs) to businesses that may have a short-term need or cannot afford to purchase a system of their own. “Many of our customers will rent for a month or more, but we also have customers who will come into our local office and use one of our microscopes there. In the two and half years we’ve been in business, we’ve delivered microscopes all over the country,” he says. The company, Electron Microscopy Innovative Technologies, LLC, allows smaller technology companies to have access to equipment that they likely wouldn’t have been able to afford previously.

Although he did not enroll in any business classes at UConn, Neal learned many skills from his MSE courses that helped him become an entrepreneur. “First, in order to succeed in the technology industry, you need to be laser focused on a very specific industry need,” Neal explains. “UConn MSE gave me the technical tools and rigor to be able to grow into a technical expert in this field.” He adds that the smaller class size contributed to his ability to communicate effectively with others, which is a key component to running a business.

Between UTRC and Electron Microscopy Innovative Technologies, Neal is constantly utilizing and building upon his MSE education. “My time is split between managing and working on materials development programs and providing failure analysis support for different business units in the corporation. Some days I spend a lot of time in the lab and others I spend doing project management type work.” He prefers being in the lab.

Finally, Neal strongly urges anyone who has an interest in science coming out of high school to look at Materials Science as a career choice. “As technology in the next century progresses, there are two main components which are likely to advance most modern technologies: one is the improvement of software that goes into many of our electronics, but the second piece of the puzzle is creating new materials to continue to push the boundaries of technology,” he explains. “There is no shortage of career opportunities in the field of Materials Science and that isn’t likely to change in the foreseeable future.”