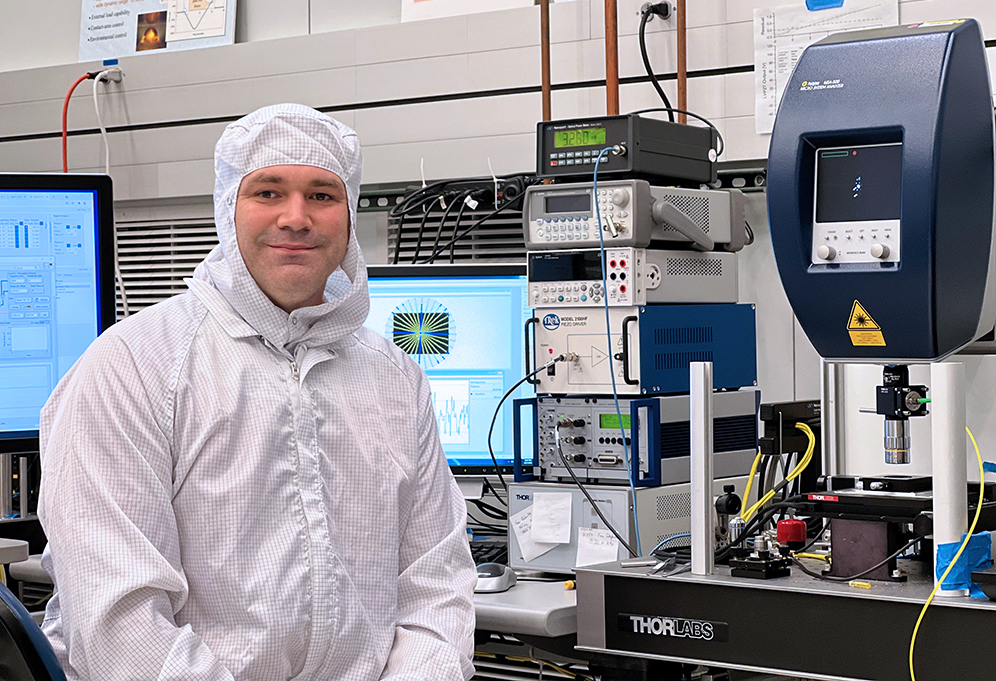 UConn MSE alumnus William Osborn was drawn to materials science by the rowing shells he raced in for sport as a high schooler. From a young age, he was curious about what defined the boats’ performance and how it related to the properties of the material the boat is made of.  Now, as a scientist with the National Institute of Standard Technology (NIST), Osborn’s job is rooted in the importance of answering questions about material measurements such as those he once asked about the shells.

“I learned to row in an old 1970s wooden boat that was so heavy that even eight high school freshmen struggled to pick it up,” Osborn says. He recalls later stepping into a 1980s boat with a wooden skeleton and a single skin of Kevlar; it was light and delicate. Years later, he says he would race in even lighter shells built from unidirectional carbon fiber and honeycomb composites.

“The importance of what something is made from really sinks in when you lift it over your head every day.  I didn’t know materials science and engineering was even a field of study at that point, but I was already interested,” Osborn says.

After discovering he could major in his passion, Osborn completed his bachelor’s in 2004 with a degree in MSE from the University of Washington, Seattle. Just a year later, he moved across the country to continue his studies at UConn.

An internship during Osborn’s undergraduate years did to him what first internships often do; it showed him what he liked and didn’t like, narrowing down the question of what he wanted to do after graduation. “I enjoyed the testing work more, and it became clear I wanted to have a career where I could push the state of the art. In engineering fields, that generally means PhD,” he says. UConn became the place which led Osborn to do just that.

According to him, the academic quality of his work at UConn served his career as it encouraged both the applied and theoretical sides of the field. Aside from this, the social aspect of his degree impacted his career decisions. “Having a positive experience working with professors, technical staff, and other grad students in a research lab reinforced my decision to work in an R&D environment,” Osborn says.

As a PhD candidate, Osborn also worked as a teaching assistant for one semester. “I was surprised how few of the undergraduate students sought help when they needed it,” he notes about the experience.

However, help from professors is what often propels students further in their career. It was one of his graduate professors, now-Department Head Bryan Huey, who suggested Osborn go for the National Research Council (NRC) Postdoctoral Fellowship with NIST. “It was great advice. The depth and breadth of scientific capabilities offered at NIST impressed me at the time and still does today,” Osborn says.

Since earning his PhD in 2009, he has worked for NIST as a bench scientist, spending most of his days in the lab. According to him, there have been opportunities to move into management or other roles that are less hands-on, but his partiality for the lab has kept him there. “I love being able to pick industrially relevant technical challenges and getting to develop new instruments, data analysis methods, or even reference materials to address the needs of other scientists in the U.S. and around the world,” he says.

Though nearly every day is spent in the lab, it never bores Osborn. “With very few exceptions, no one day is like the previous day—and I love that,” he says. Though he does admit there are some days that are a bit more fun than others. “People bring us awesome metrology challenges! Companies or other government agencies ask us to help develop a way to measure things that are important to them, but only after a bunch of talented scientists in their own ranks have tried first,” Osborn says.

Getting to do the work he does has made Osborn realize the importance of communicating with those around him. “Be willing to share your time and talents with colleagues and collaborators,” he says. According to him, some of his most influential work has been a result of collaborations.