Every day at 5 p.m., the national anthem plays base-wide at Wright-Patterson Air Force Base in Dayton, Ohio. At this moment each day, Tulsi Patel is reminded of her duty to her country as an NRC Research Associate with the United States Air Force. “While I am just a speck in this complex ecosystem, having this higher purpose is what inspires me every day,” she says. 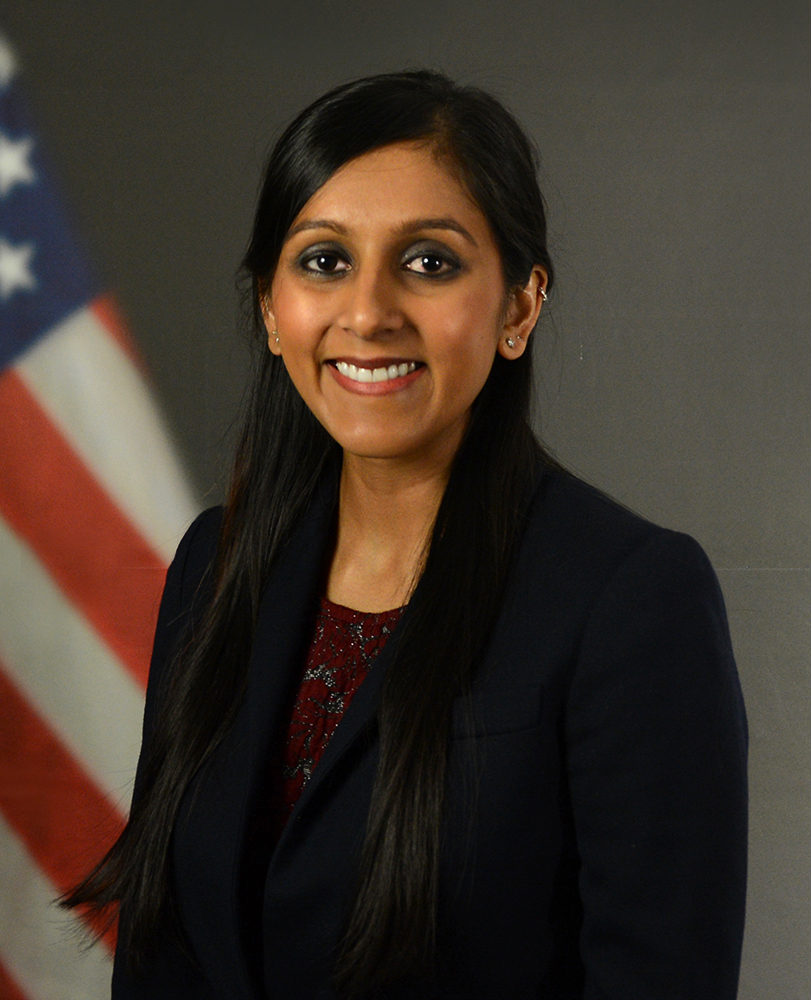 Just three years ago, the former chemical engineering undergraduate was in the midst of completing her PhD from Materials Science and Engineering (MSE). It was during this time that Patel says Professor S. Pamir Alpay introduced her to UConn alumnus and Air Force Research Laboratory (AFRL) CTO, Tim Bunning. At that time, Bunning was working as the Chief Scientist of the Materials and Manufacturing Directorate at AFRL. According to Patel, Bunning invited her out to the laboratory for a visit. Once she was there, she says she immediately knew she wanted to work there.

Patel now conducts her own Air Force related research as part of the ceramics research team in the Materials and Manufacturing Directorate. From her time at UConn, her research portfolio has expanded from ferroelectrics and ceramics for energy storage and conversion to structural ceramics and composites. Currently, her main project pertains to the design, fabrication, and characterization of multifunctional ceramic matrix composites. This work is an extension of her prior PhD research on integrated functionalities for metallic aerospace components.

According to Patel, she is looking at different modes of structural health monitoring for various materials systems. “One of the five strategic capabilities, outlined by the U.S. Air Force 2030 Science and Technology Strategy, is global persistent awareness. This technological opportunity asserts the need for powerful sensing capabilities including low-cost sensors integrated on distributed platforms. I hope my work contributes to the efforts tasked by our National Defense Strategy,” she says.

Aside from her main research topic, Patel says she has also contributed to many of the ongoing projects within the ceramics research team. This includes advances with preceramic polymers, and polymer/ceramic nanocomposites.

Fabricating nanocomposites and characterizing them with in-situ SEM mechanical testing and TEM tomography is something that Patel says she never thought she would do. But then again, she also never thought she would live in Ohio. Patel had spent over a decade at UConn and the entirety of her life in Connecticut. She describes the decision to leave this life as a big one because she never imagined herself living outside the Northeast.

However, without the ambition to take this risk, she would not have enjoyed the challenge of so many new experiences. Patel’s ability to face the discomfort of change that came with taking the job could not have been possible without the people and places that came before. “Both Dr. Alpay and Dr. Hebert have had a significant impact on the researcher and person I am today,” she says.

According to Patel, her former advisor Professor Rainer Hebert guided her towards experiences like the NSF fellowship in Korea and AAAS science policy workshop in Washington, D.C. “These experiences have shaped me to be a better engineer and citizen in society,” she says.

Patel says that Professor Alpay is to thank for encouraging her to pursue a PhD. “He pushed me to learn everything from ferroelectric modeling to metal additive manufacturing, and most importantly, how to think outside the box,” she says.

“It has been rewarding for me and Pamir to see Tulsi develop her skills as a scientist and engineer as she succeeds first with a prestigious NRC award and now even more so in the field at a government lab,” Hebert says.

However, her former advisors taught her more than just MSE skills. “Dr. Alpay and Dr. Hebert have taught me the importance of humanity and integrity. They always put their students first and were consistently role models,” she says. She finds these traits increasingly important working in a government laboratory, and necessary to be an effective leader. “They are what I strive to achieve in the years to come. I am just so lucky to have had them as advisors and role models to look up to,” she says.

The new opportunities that her mentors pushed her towards have made her a champion of embracing the unfamiliar. “Be open to new possibilities and take risks,” she says. “Don’t pigeonhole yourself to one job, one location, or one opportunity. There is just so much out there—perhaps a job that you may not know even exists.”

According to Patel, stepping outside of her comfort zone during the past two years at AFRL helped her gain confidence in who she is and what she has the potential to do. “It took me ten years of higher education and a postdoctoral position to finally be able to truly identify myself as an engineer and researcher. I have become confident in my skills, expanding on what I learned in undergrad and grad school, knowing that the sky’s the limit,” she says.

Patel says that she realized this opportunity is not present at all in some parts of the world. “During my graduate studies, I had the privilege to live and travel to other countries, learning firsthand that the boundless opportunities available in the U.S. are very much limited elsewhere,” she says. This recognition adds to the immense gratitude she has for her parents, who emigrated to the United States from India to give her these opportunities.