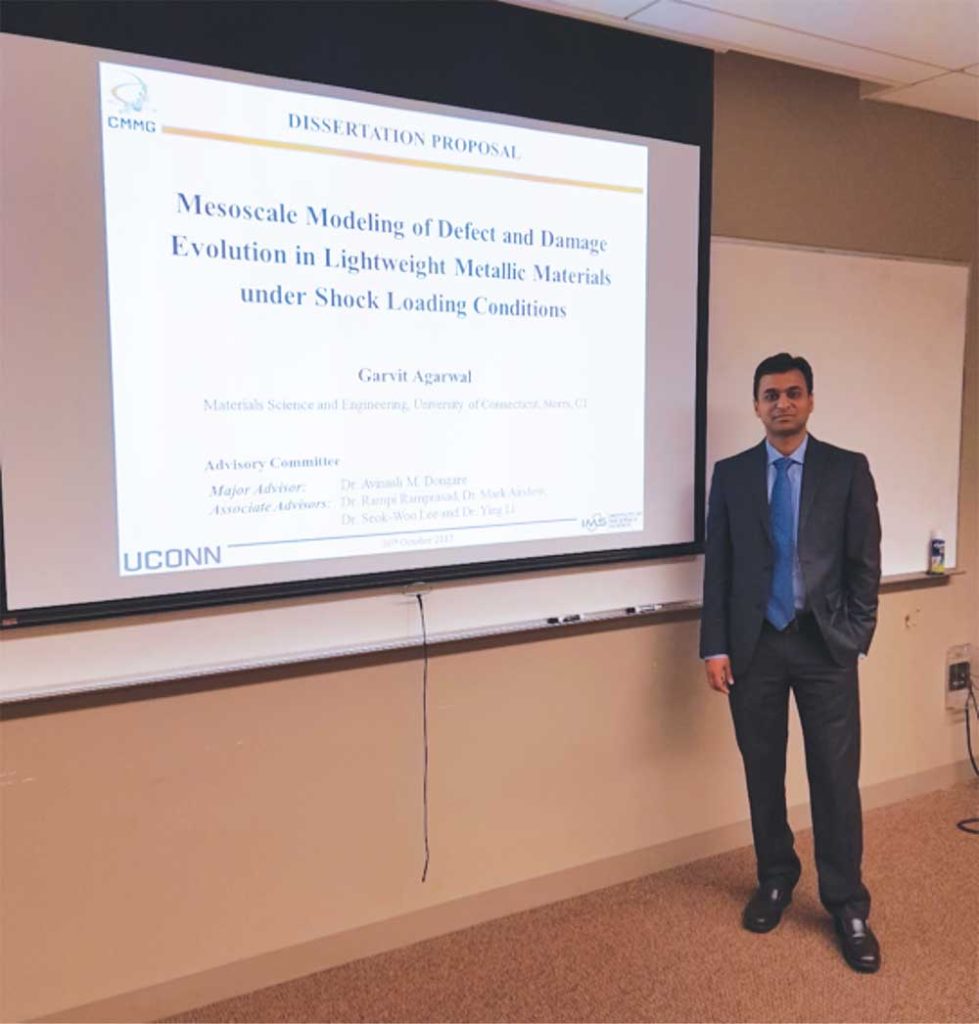 Garvit Agarwal is a Ph.D. student studying atomistic and mesoscale modeling of dynamic defect structure evolution during high strain rate loading. He is the recipient of the 2018 Graduate Student of the Year Award, for his exceptional work and dedication to the field of materials science and academic excellence since he joined us in 2014.

“I feel really honored to win the graduate student of the year award,” Garvit said. “I am extremely thankful to my adviser, Dr. Dongare, who not only gave me the opportunity to work on the novel research project but also constantly guided me and taught me a lot of things during the past four years of my graduate career at UConn.”

“It’s great to see Garvit mature and grow as a researcher over the last four years,” Dr. Dongare said. “He is very passionate about learning new skills and is keen to put in the hard work required. It is very important for students to get as much exposure as possible while they are still in graduate school and Garvit is certainly making the most of it. His hard work and perseverance has opened up a lot of opportunities for my group to collaborate, and he is a leading researcher in the making. He certainly deserves the Graduate Student of the Year Award.”

Garvit was given the award after being chosen by a group of faculty and staff for his outstanding work in the field, which focuses on atomic scale and mesoscale modeling of the deformation and failure behavior of metallic materials under shock loading conditions.

This photo is of Garvit’s research subject, which depicts the capability of L2-QCGD and L4-QCGD to accurately capture the wave propagation and spall failure behavior of 100 nm grain sized polycrystalline Al microstructure subjected to impact loading at a piston velocity of 1 km/s. The MD simulation consisted of ~700 million atoms while the same system is modeled using only ~89 million R-atoms in L2-QCGD and ~11 million R-atoms in L4-QCGD. The reduced number of R-atoms allows for modeling system sizes at the micron length scale at a fraction of computational cost using the QCGD method.

“The most interesting thing about atomistic modeling techniques like molecular dynamics (MD) simulations is that it gives us the capability to design experiments virtually on a computer screen and study the effects of different operating environments in a systematic way,” he said. “It also gives us greater flexibility and the ability to study phenomena at the atomic resolution which are difficult to study using experiments.”

He joined UConn in 2014 to pursue his Ph.D. here at the Department of Materials Science and Engineering.

“In four years of my graduate career at UConn, I got numerous opportunities to attend conferences as well as visit national labs such as the Army Research Laboratory and Los Alamos National Laboratory,” Garvit said. “It allowed me to interact with a number of scientists and researchers from diverse backgrounds which gave me greater exposure to cutting edge research and state-of-the-art research facilities which is really important for a graduate student in order to grow into a successful researcher.

Garvit earned his Bachelor’s in metallurgical and materials engineering in 2011 from the Indian Institute of Technology in Roorkee, Uttarakhand. After he graduated, he worked at Jindal Steel and Power Limited, an India based steel plant, as Assistant Manager, before moving to the United States in 2014.

During his time at UConn, Garvit had to pick up a totally new skillset in order to pursue his research in materials modeling.

“Since I had no previous training/background in the field of atomistic modeling of materials, I not only learned a lot of fundamental material science concepts but also developed good analytical and programming skills,” Garvit said.

“I believe that it is a really fascinating time to be in the field of computational materials modeling. The progress in computational modeling methods are accelerating researchers’ ability to accurately predict the properties of new materials even before experimentally synthesizing them,” he said.

After earning his Ph.D., Garvit said he plans to continue pursuing knowledge and excellence in the field.

“I wish to continue doing research in field of computational material science and I am actively looking for postdoctoral opportunities,” he said. “The department of material science and engineering at UConn offers a unique mix of experimental and computational faculty members which opens up opportunities for a number of collaborations within the department. All the faculty members in the department are very helpful and motivating and the interactions with them has really helped me grow and develop as a researcher and student.”