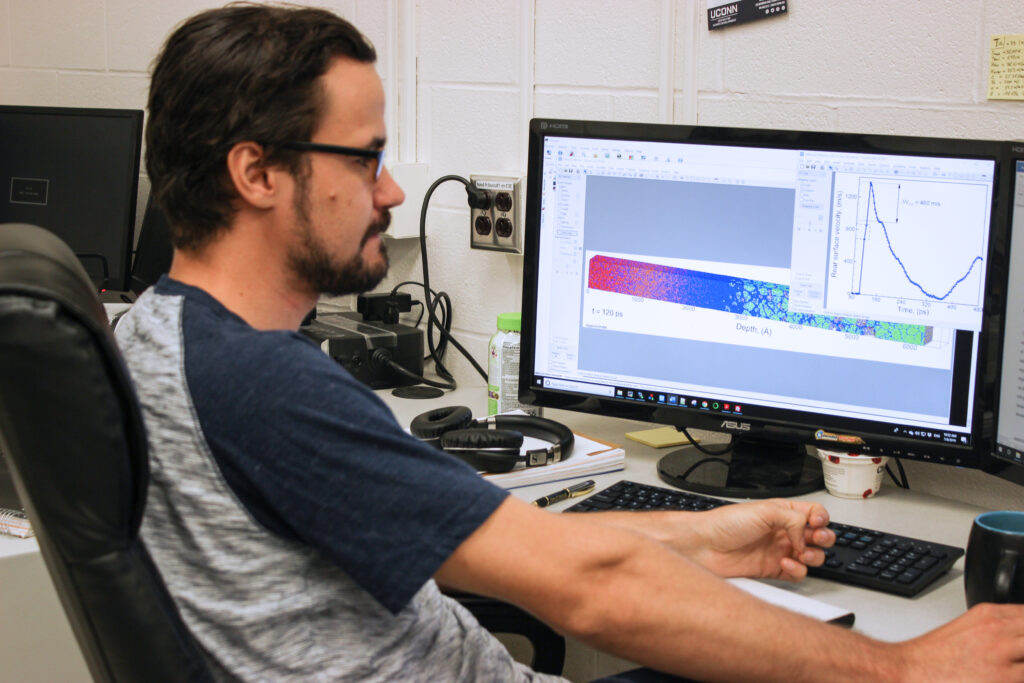 Exploring ways to strengthen lightweight structural materials in order to withstand deformation and survive under extreme environments is understandably complex. But this scientific process motivates Sergey Galitskiy, Ph.D. student in Associate Professor Avinash Dongare’s lab, to continue his research on modeling the material response of metallic systems under conditions of impact/shock loading. When he does produce results, the chance to share that with the Materials Science and Engineering community is thrilling.

Sergey’s research focuses on investigating the mechanisms of fracture for Al and Mg based materials under shock loading conditions that result in very high strain rates (~107 – 1010 s-1). His primary focus is examining how these Al and Mg structures react on the atomic scale to plate impact or laser induced shock, which has not previously been theoretically investigated. The work uses classical molecular dynamics (MD) simulations to investigate the evolution of defects (dislocations) and phase transformations (melting) during failure.

“What we’re doing is modeling the irradiation of a thin film by an ultra-fast laser, generation of a resulting shock wave, and usually the consequential fracture of the material,” Sergey said. “There are pros and cons of investigating a material’s strength with laser-induced shock. On the one hand, very high temperature leads to material ejection. On the other hand, in comparison to high-velocity flyer (explosive) approaches, lasers provide precise control of the energy deposition which can more readily be compared to our theoretical work.” 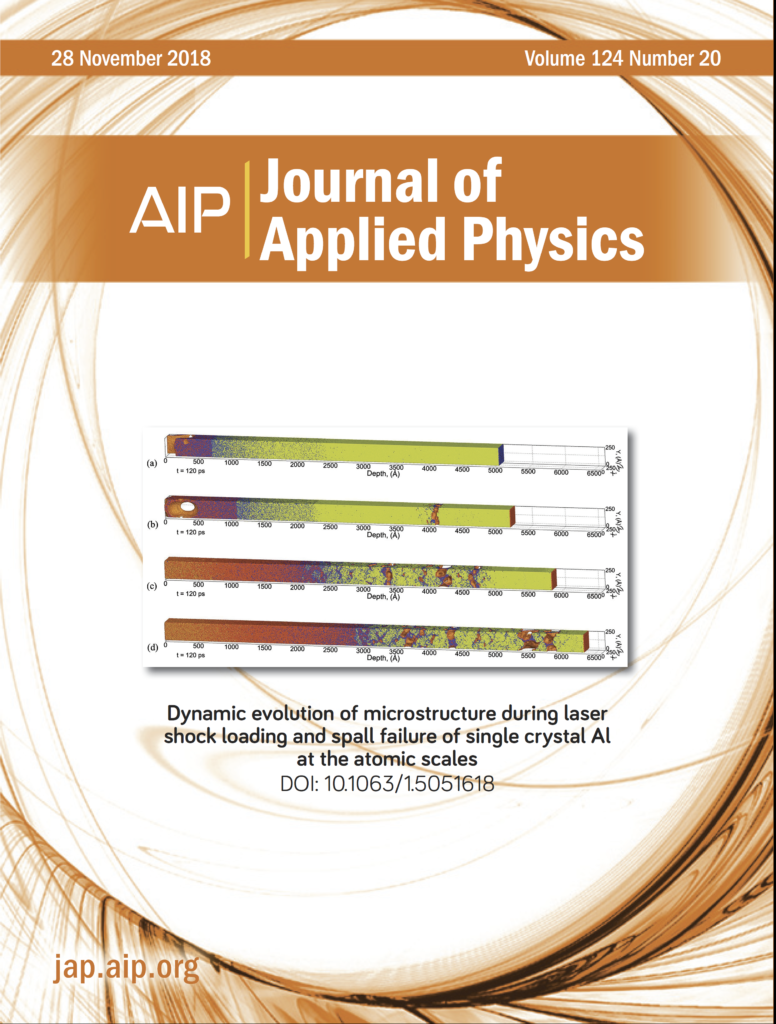 Sergey’s research titled “Dynamic Evolution of Microstructure During Laser Shock Loading and Spall Failure of Single Crystal Al at the Atomic Scales” featured on the cover of the Journal of Applied Physics.

The understanding of material behavior (fracture) in such extreme conditions can be useful for the defense and aerospace technologies. For instance, if they can create an aluminum-based structure that is both lighter and stronger than what is already used to build airplanes, they could potentially reduce fuel costs and enhance maneuverability.

Sergey’s first article, highlighted on the cover of the Journal of Applied Physics, demonstrates the ability to model the spall failure under laser shock loading. He and Dr. Dongare were able to investigate how laser loading conditions and crystal orientation result in variations in dislocation density evolution and failure behavior.

“One challenge in the applicability of the MD method is that one can usually only model systems with sizes of a few hundred nanometers,” Sergey said. But his advisor developed a technique that scales the MD simulations to model large systems, up to tens of microns. This method, Quasi Coarse Grain Dynamics (QCGD), is able to retain the atomic scale characteristics of the defect evolution, phase transformation behavior, and failure behavior, all for a fraction of the cost of running MD simulations.

“We have extended the capability of the QCGD simulations to model laser interactions with metals, allowing the modeling of systems and phenomena that are relevant for laser shock loading and additive manufacturing.”

Building on some of his predecessor’s work is part of what makes the scientific process exciting for Sergey. The opportunity to meet and work with pioneers in the MSE field, including the chance to work with his advisor, Dr. Dongare, was a major factor in his decision to join UConn’s MSE program as a Ph.D. student.

Before coming to UConn in 2016, Sergey earned a Bachelor’s and Master’s degree in Physics from South Federal University in Russia, and was working as a Research Assistant at the University of Kassel in Germany, experimenting with organic atomic systems.

“During my last project in Kassel, I worked in modelling the processes in neuron cells on the atomistic level.  There, I gained experience in MD simulations, and I wanted to continue my scientific work with this method,” Sergey said.

When Sergey discovered that Dr. Dongare’s group is also doing MD simulations—with metallic, rather than organic, systems—he knew he had to join them. When he eventually joined the lab, he got to build on his experience working with a Two-Temperature Model (TTM), which describes laser radiation interaction with matter on an atto – femto second scale of (10 ^-18 – 10 ^-15 seconds), and extend the model to some metallic systems.

But transitioning from Physics to MSE, and from consuming others’ research to meeting the researchers and producing his own theories, isn’t easy. Sergey credits UConn’s MSE program for helping him develop as a scientist, providing him with the training and MSE courses to become successful in his research, and providing professional development opportunities.

“When I started my scientific career in Russia and Germany, I never spoke to the scientists who came before me. I just read their books,” he said. “But here, at TMS conferences, for instance, scientific book authors came up to my peers and were introducing themselves. Those people who created the field, who are on the tip of the science, you get to meet them,” he said.

“To me, appreciation is one of the best gifts in scientific society.”