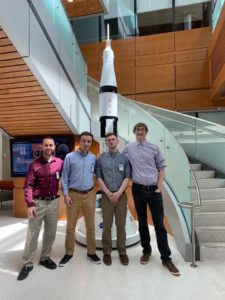 MSE seniors Zachary Putney, Jonathan Gager, Ryan Wrobel and Spencer Matonis are currently elbows-deep in the opportunity of a lifetime: Helping building the next generation of 3D printing in space.

The four are working on developing a recyclable polymer composite for 3D printing objects for NASA astronauts. In March they visited their Senior Design sponsor at the George C. Marshall Space Flight Center in Huntsville, Alabama, where they met some of the aeronautics engineers and researchers, toured the facility, and dropped off some of their samples for further testing.

“We’re really thankful and happy to be able to be working on this,” Spencer said.

The group’s efforts are a part of their Senior Design Project, a two-semester course that partners senior MSE students with industry sponsors to use their materials science knowledge, creativity and problem-solving skills to tackle real-world engineering issues and tasks. Throughout, they’re mentored by MSE professors, industry professionals and experts from their sponsor company.

NASA has been collaborating with the MSE department for eight years now, focusing on 3D printing. which has become ubiquitous in the world around us and even beyond—it is now also an essential part of living and operating in an enclosed microgravity environment such as the International Space Station.

“This is an opportunity for the students to work both with each other and with a groundbreaking agency,” the group’s advisor Dr. Volkan Ortalan said. 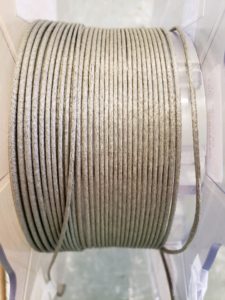 Roll of extruded composite filament feedstock, ready for use in a 3D printer (50% Ni by weight)

“Our student team has taken on a big challenge—development of novel feedstocks for in-space manufacturing utilizing 3D printing,” Dr. Ortalan said. “I have observed our students bringing their ideas and engineering designs to life. I have seen them working on several technical presentations and reports, working on novel filament development for 3D printing, collaborating as a team, and working diligently to meet the numerous NASA deadlines.”

The students’ Senior Design project is ultimately focusing on creating a printing material that’s both light and durable– perfect for crafting tools needed to operate a space station, without sacrificing strength for weight economics. This is critical when sending materials to the ISS, or to possible future human colonies on the Moon or Mars.

The properties include dielectrics, which effectively store a charge and can be incorporated into batteries. One of the team’s current challenges is efficiently integrating dopants into the matrix material so it still retains the properties and the printability of plastic, while supporting that electric charge. Currently, the group is using Ultem, a highly-durable 3D printing material, as a base. 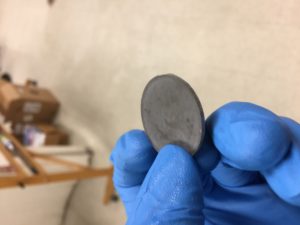 “A lot of this project has been figuring out how to get the dopants into the Ultem,” Spencer said.

The group’s current methodology is to use strong solvents to dissolve small pellets of the Ultem into a gel, mix them with a powder form of the dopants, and cast this into wafer molds. These can then be fed into a high-temperature extruder and wound onto a spool for transport before it’s loaded into a fiber-fed 3D printer.

As part of the Design Project, the group has already sent several of the wafers to a professor at Auburn University, who will be working to characterize the material and see if the dopants are working as expected.

“So far, NASA has been super happy with our results,” Spencer said. “We’ve encountered our share of problems, but we work through them and have been able to stay on track.”

For all four students, the opportunity to work with NASA is an exciting prospect, especially as they’re establishing connections and helping solve issues as part of their Senior Design. Ryan said he wants to work at NASA as an engineer after he graduates, and sees this as a way to get his foot in the door.

“Ever since I was young, I’ve been fascinated by space,” Ryan said. “Even if we’re not directly contributing to what NASA is doing, we’re still a part of it.”

Spencer is grateful that he’s able to contribute to the “Second Space Race.”

“I’m a little remiss to miss the first space race, but now I get to work on the second one,” Spencer said. “You might not get that opportunity ever again.”

For Jon, the ability to gain hard experience on the project is one of the most valuable things for him.

“This is the first open-ended project I’ve ever had,” he said. “I get to find and develop solutions and work with others. You can’t learn that from a classroom. It’s very rewarding.”

While the team is wrapping up their project for Senior Design Day at the end of the semester, they are eagerly awaiting the characterization results from their collaborators.

Ryan said working with NASA’s engineers has been great, as the agency is open with their communication and enthusiastic to work with students.

“I remember we went to Huntsville to take our samples over, and we met with the engineers,” he said. “When we gave them the samples, one of the engineers replied ‘It feels like Christmas….’”

While it is a student-based project, the team is expected to meet the expectations of the agency they’re working with, Dr. Ortalan said.

“This project was treated like a regular NASA approved project and necessitated maintaining a budget, meeting numerous requirements, and communicating with NASA officials,” he said. “This work can have an important impact on current and future NASA research and programs. It is truly fulfilling to see what students can achieve when presented with an opportunity and given the support to explore their curiosities.”