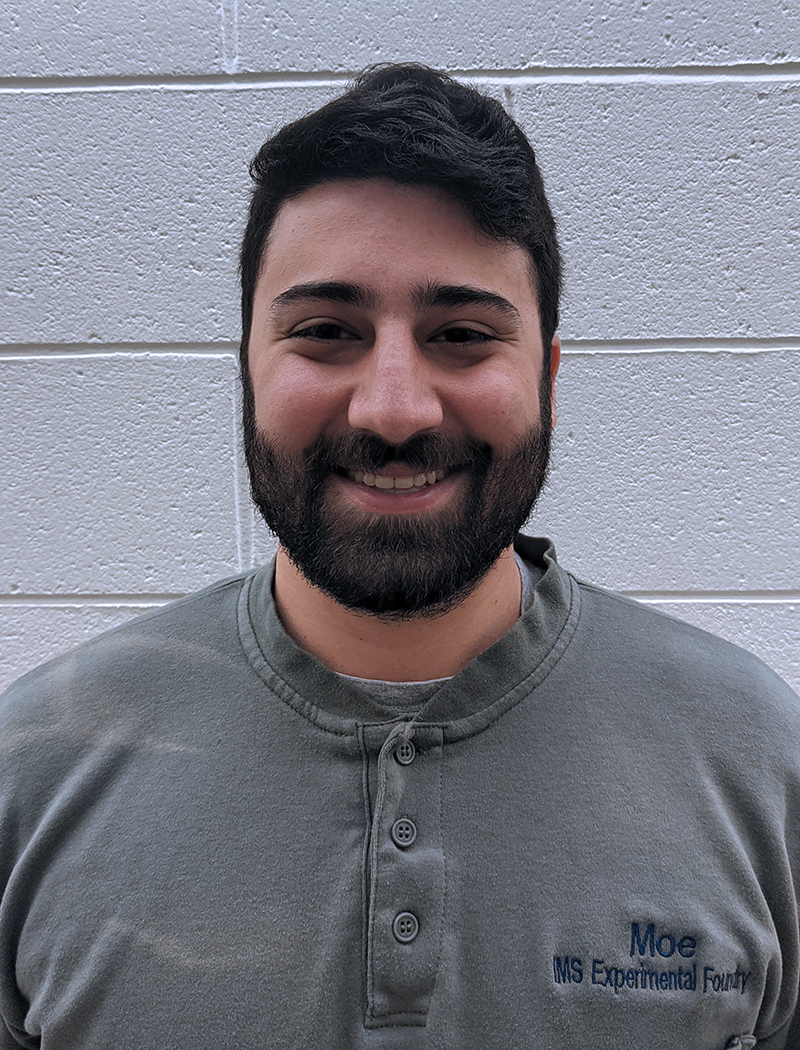 When Moe Daeipour was in high school, he witnessed something life-changing— a liquid-nitrogen frozen marshmallow. While this may sound insignificant to some, it was the catalyst for Daeipour’s career in materials science and engineering. “I had never heard of material science prior, but the experience was cool enough that I decided to pursue a degree in MSE,” he says.

Fast forward several years and Moe is working on a graduate degree with the goal of soon starting his own company.

In 2017, Daeipour graduated with his bachelor’s degree from UConn MSE and made the decision to stay for his graduate studies. It was during this time that he began working with Professor Serge Nakhmanson’s Research Lab. “What initially caught my interest was that his group members were publishing some really cool papers and clearly developing skills that allowed them to computationally investigate complex material systems at different length scales,” he says.

However, Nakhmanson is not the only advisor Daeipour gets to work with. He also performs casting and solidification research with Professor Hal Brody, in the Institute of Materials Science (IMS) experimental foundry. “Not many students have the benefit of working with two main advisors; some may even consider it a curse, but I see it as an opportunity to learn from two very skilled individuals,” he says.

Part of the challenge and excitement posed when one has two advisors is undertaking two different research projects. Currently, Daeipour is working on a project related to the thermomechanical and thermoelectric behavior of polycrystalline ceramics with Nakhmanson.

“It is difficult enough to develop competence and become a leader in one specific area of research. Moe is doing that in two areas simultaneously – experimental metallurgy and computational materials science – which is a huge undertaking,” Nakhmanson says.

Aside from Nakhmanson, a lot of Daeipour’s interdisciplinary research has been inspired by his work with Brody on casting. “The experience working in the lab with him during my graduate studies has molded the way I approach engineering design problems and conduct experimental research,” he says about Brody.

Brody confirms that the interdisciplinary work which Daeipour embraces stands out. “He volunteers to be involved in and to lead all aspects of our research group’s activities in outreach to K-12, undergraduate teaching and mentoring, individual research and collaborative research with colleagues and with industry partners,” Brody says.

According to Daeipour, the bulk of his current research is focused on the solidification and design of non-ferrous aerospace castings.  This research is meant to decrease the amount of time engineers need to spend in the laborious design stage for new castings. “Ideally, it will help improve the quality and reliability of non-ferrous casting processes by helping casting designers make iterations virtually, rather than on the manufacturing floor,” he says.

According to Daeipour, the hope is that designers and manufacturers will be able to use this research to reduce scrap rates and energy consumption, ultimately saving the company time and money. “It’s satisfying to think that the experience I’m gaining through my research here at UConn can easily be applied to a variety of different fields and industries,” he says.

According to Daeipour, this is the reason he initially became interested in the MSE field. “Although the fundamental research we do is centered on materials science, we use aspects of mechanical, electrical, computer, civil, and chemical engineering to solve the challenges that we are facing,” he says.

Daeipour’s appreciation for the interdisciplinary applications of his work also connects to his interest in pursuing entrepreneurship–something he has had in mind since his undergraduate years. “Just the idea of starting my own company and being my own boss has always appealed to me.”

This past year, Daeipour says he became better acquainted with the world of entrepreneurship when he participated in Accelerate UConn, UConn’s National Science Foundation Innovation Corps (I-Corps) Site. The mission of this program is to kick-start entrepreneurial teams whose technology concepts are likely candidates for commercialization. It provides them with the resources they need to start a company and get an idea out into the market. “I felt it was an excellent experience that opened my eyes to a lot of opportunities worth pursuing,” he says.

Daeipour says he is still working on his big idea. “My research and education in the department and at UConn have helped give me the design experience, motivation, and confidence to actually come up with an idea and apply it,” he says.

“Moe is taking full advantage of the UConn academic experience,” Brady says. Whether Daeipour recognizes the abundance of opportunities a large state university offers, or it is simply in his nature to exercise many fields of interest at once, Daeipour proves that MSE students need not commit to just one passion.