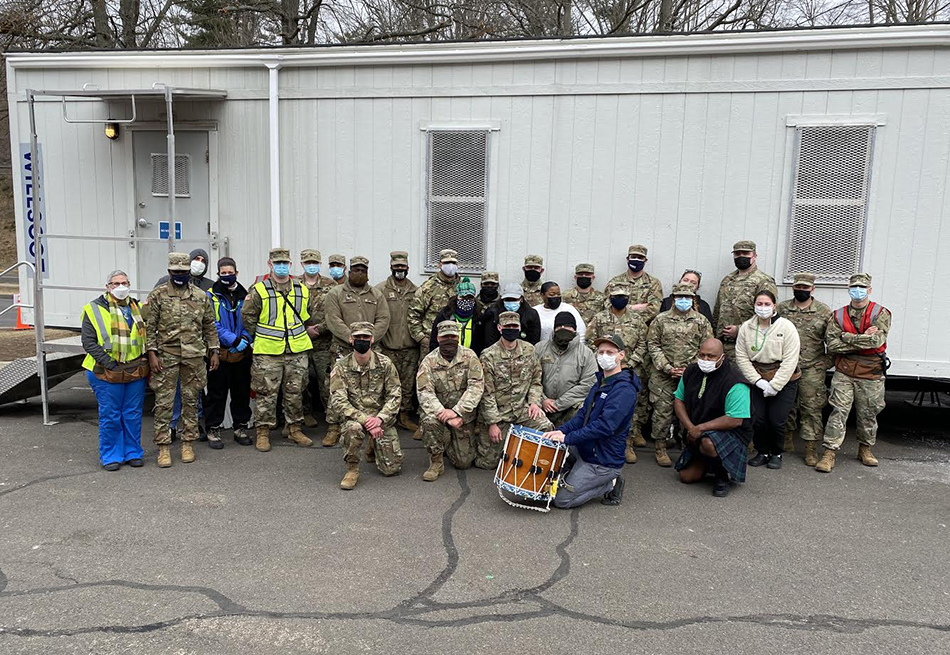 As much of Connecticut becomes vaccinated against the coronavirus, many of the mass vaccination sites are handled by not just healthcare workers but also military personnel. Materials Science and Engineering graduate student Michael Fazzino is one of the soldiers who ensures the safety and efficacy of the Middletown mass vaccination site.

After earning his bachelor’s degree in the spring of 2019 from UConn MSE, Fazzino took a semester off to undergo military training before he would continue as both a member of the armed services and a UConn MSE graduate student this past winter.

Though this was a progression in both his academic and military careers, managing the two roles was nothing new to Fazzino. He had been managing higher education and a role in the army since he began both in the fall of 2015. He started the latter as a member of the Army Reserve Officer Training Corps or ROTC.

This decision may seem overwhelming to some, but Fazzino was driven by an important influence. “My uncle was the main reason I joined the Army, as he is a veteran and a large influence on my life,” he says.

Quickly, Fazzino was thrown into both graduate research and his work for the military. “I got orders the first week of February to assist with the vaccinations in Connecticut, and our Middletown Wesleyan mass vaccination site opened about a week after that,” he says.

Fazzino then assumed his role as ‘Officer in Charge’ or OIC by day, and graduate researcher by night. “On an average day I will spend most of my time at the vaccination site, and I do what I can when I get home,” he says. He is responsible for managing all of the soldiers at the site. “I act as a bridge between the soldiers and civilians, and as a point of contact at the site for other military personnel,” he says.

As an MSE graduate student, Fazzino has been focused on an Air Force Research Lab (AFRL) project with Professor Serge Nakhmanson’s research group collaborating with the Additive Manufacturing and Materials Data for Manufacturingteam.

Fazzino’s main research project involves simulating various aspects of additive manufacturing processes with Discrete Element Method (DEM) software. This is in partnership with Professor Rainer Hebert’s research group. Simultaneously, he is involved in activities for the Metal Casting Group under the guidance of Professor Harold Brody.

“I am very impressed by Mike’s dedication to his duties both as a grad student and an Army officer, as well as his eagerness to learn as much as possible from MSE faculty and peers,” Nakhmanson says. According to Nakhmanson, though he appreciates Michael’s service, he hopes he will return as a full time student once his duties are complete.