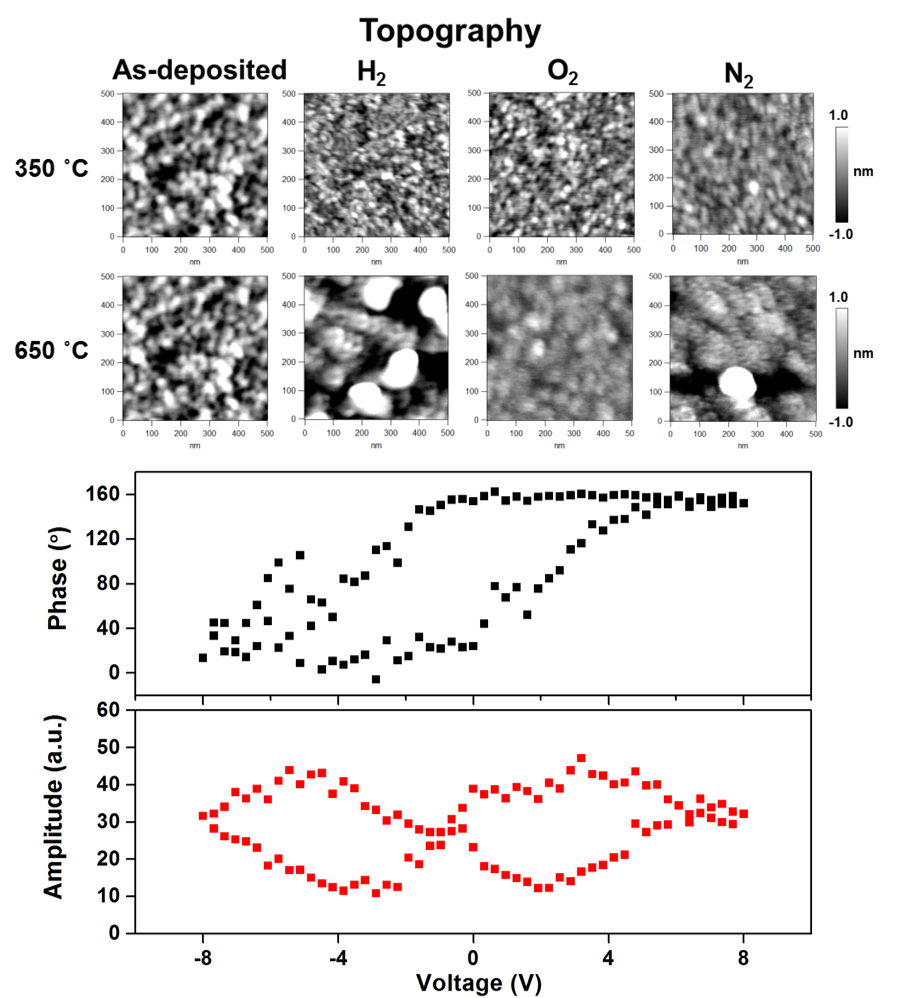 (Top) PFM images of SnTiOx films, both as-deposited and annealed in different environments. (Bottom) Phase- and amplitude-voltage hysteresis loop of a SnTiOx thin film annealed in O2 at 350 degrees Celsius showing that this film has a meaningful piezoelectric response. All measured samples are 40 nm-thick.

Published in the Journal of Vacuum Science and Technology (JVST), the paper became one of the few most read JVST papers for at least two months in a row. This led to the American Institute of Physics’ writing a special press release on the group’s publication.

Many useful properties of technologically important dielectric materials directly depend on the magnitude of electric dipole moments that can be created within them. Currently, the “burly” compounds that can support the largest electric polarization include perovskite lead titanate PbTiO3 and its solid solution with Zr, called PZT. Unfortunately, both of these materials include lead ions. While being toxic, lead is a component necessary to create the strong dipole moments.

In collaboration with an experimental group at the University of Illinoise-Chicago (UIC), Dr. Nakhmanson’s group is exploring the possibilities for replacing lead with tin, an environmentally friendly material, in percoskite-oxide dielectrics. He describes this work: “Theoretical simulations with quantum-mechanical codes predicted high electric polarization in (fictitious) perovskite SnTiO3 material. The problem is that, while PbTiO3 and PZT are relatively easy to make as ceramics, SnTiO3 requires a more devious synthetic approach, as Sn ions may segregate out and form tin metal, or replace Ti inside oxygen octahedral cages.”

In their attempt to fabricate perovskite SnTiOx thin films on silicon substrate, the UIC experimental group utilized a unique, custom-designed atomic layer deposition (ALD) reactor system. After the films were grown, the group analyzed their post-deposition annealing under various conditions and carried out a comprehensive chemical composition characterization.

By now, the story of Associate Professor Nakhmanson’s involvement in designing novel tin-based perovskite materials has a bit of a pedigree; It begins with a 2011 publication, while he was still at Argonne National Laboratory, where he researched the stability of epitaxial thin-film phases of the perovskite SnTiO3. About four years later, he was able to publish a more detailed study with his UConn student Krishna Pitike and  postdoc Lydie Louis. 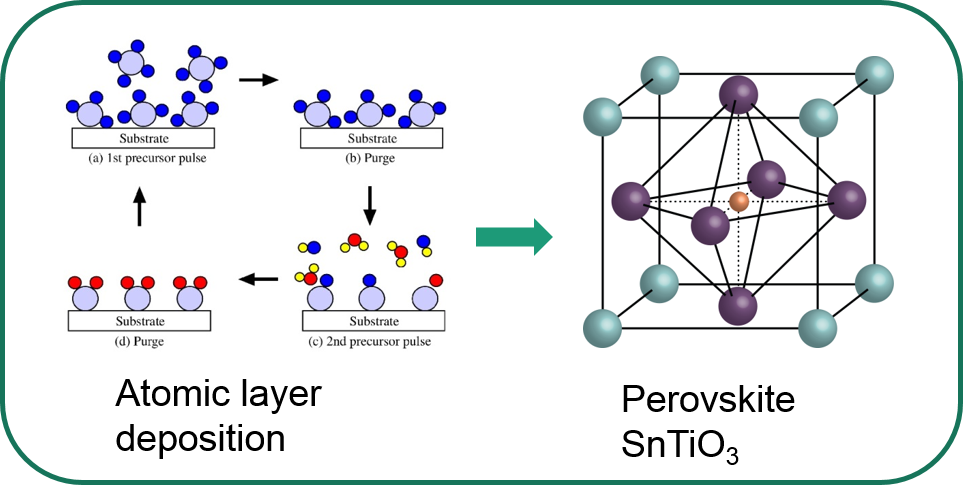 A sketch of the ALD process where precursor molecules of different types (delivered to the substrate in multiple pulses) undergo chemical reactions on the film surface, which results in a layer-by-layer growth of a new material.

Associate Professor Nakhmanson goes on to say, “I am excited that these ideas are starting to resonate with other members of the functional materials research community. However, that recognition is mostly due to the valiant efforts of our UIC collaborators who are putting some very serious efforts into learning how to grow this metastable compound.”

Ms. Siliang Chang, a graduate student of Professor Christos Takoudis, Dr. Nakhmanson’s UIC collaborator, conducted the majority of the synthesis and characterization work for this project. Associate Professor Nakhmanson praises the young scholar, saying, “I am genuinely impressed with Siliang’s perseverance, resourcefulness and ingenuity in the face of the complicated task of trying to put together a brand new material that no one has been able to grow before.”

The UConn-UIC collaborative team plans to learn more about the polar properties and polarization switching in these films using piezo force microscopy (PFM) equipment at Argonne National Laboratory, as well as utilizing electron microscopy techniques and doing electrical measurements at both university campuses. After firmly establishing the structure-properties-performane correlations in the already available SnTiO3 ALD samples, the team will use other substrates, including perovskite SrTiO3, in order to facilitate the assembly of the perovskite SnTiO3 structure, and to improve the ferroelectric properties of the resulting films.

The custom-built ALD reactor used in this project by the UIC researchers.