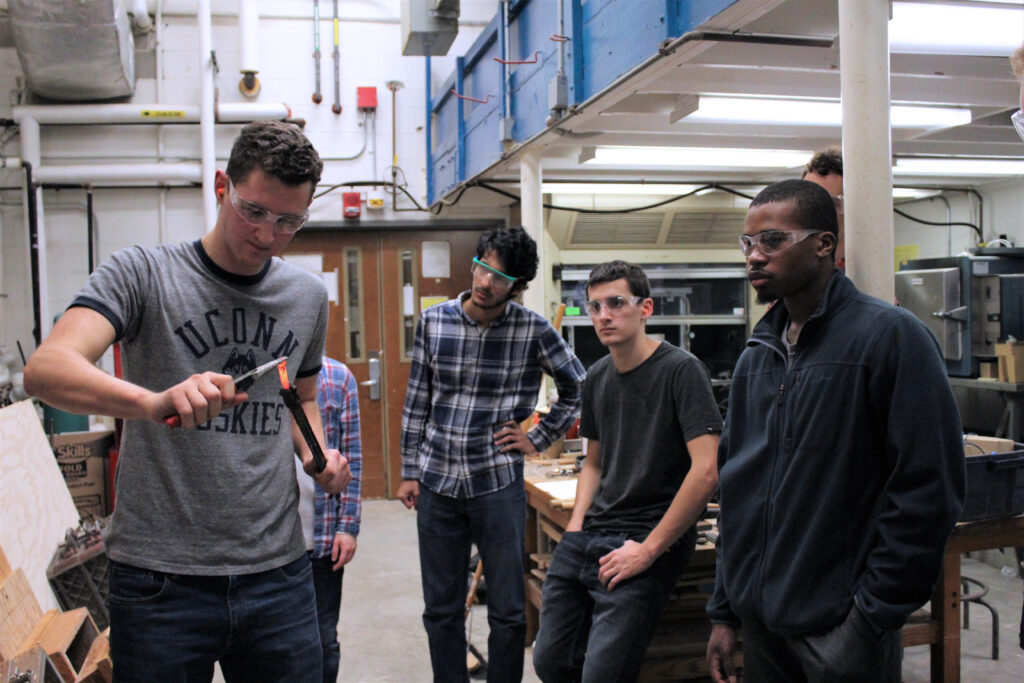 Two hundred years ago, one could find a blacksmith in every town or village in America. Handcrafting metal objects, from cooking utensils and candle holders to nails and weapons, was the only way to supply these commodities. Today, machines manufacture most of these products. Shows like Forged in Fire and YouTubers who provide tips and tricks about metalworking stoke the lingering interest in this craft for most. Nevertheless, blacksmithing remains a niche hobby. 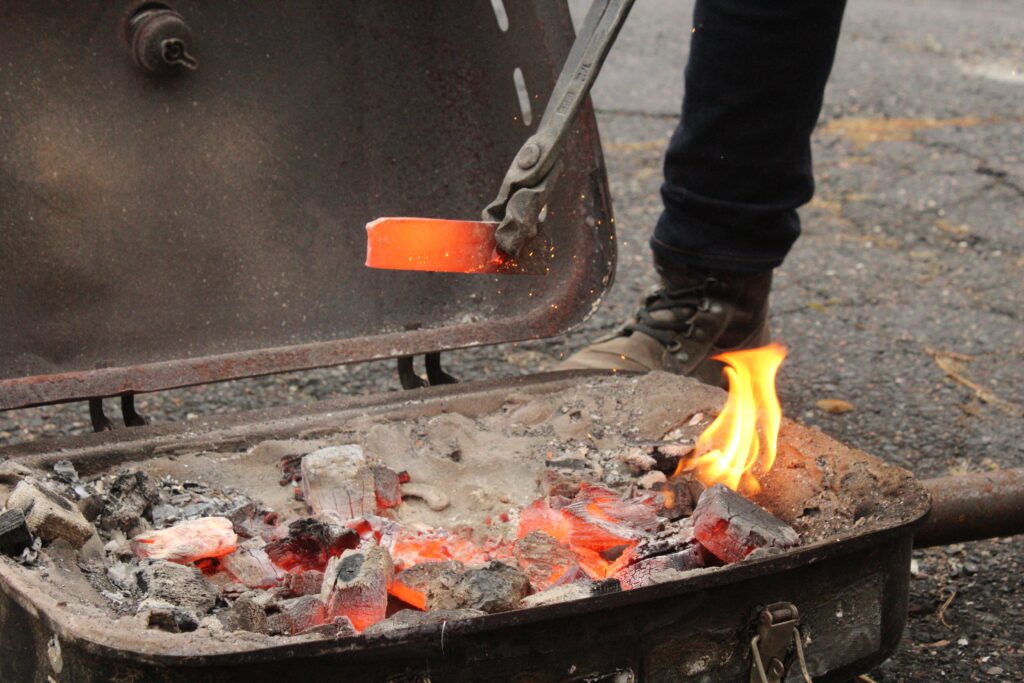 Sam built a homemade forge using an old grill and some tricks he learned from the MSE program, and from YouTube.

However, one student at UConn is trying to expand interest in the historic trade. UConn Materials Science and Engineering undergraduate Sam Bedard launched the Metalworking Club this year to teach people about the craft of blacksmithing and casting in an environment where they can get hands-on experience, and learn about MSE at the same time.

“People within and outside of MSE are thinking about blacksmithing again,” Sam said. “It’s rewarding to work with your hands and make something, and I think this is part of the overall maker movement.”

With the help of Assistant Professor Lesley Frame, who has experience with metals processing and manufacturing, Sam started the Metalworking Club (also known as the Blacksmithing Club) in spring 2019. “It has been wonderful working with Sam on this club.  He is so motivated about blacksmithing.  All I do is provide the conduit for access to department and other University resources and Sam does just about everything else!” says Frame.  This semester, they have over 200 interested students and 50 active students in majors as diverse as business and CLAS. It has been necessary to limit club activities and projects to small groups of students at any given evening meeting due to space constraints in the MSE Foundry – where the blacksmithing and casting activities take place.  As the student interest grows, the Club has been working with the MSE department to find creative ways to expand to accommodate more students.

Sam, a former environmental science and English double major, became interested in blacksmithing around the same time he switched to an MSE major. He realized he wanted to major in something more hands-on, where he could see the products of his work. He got a research position in Professor Mark Aindow’s lab and learned more about metalworking, then enrolled in a summer class.  “I set up my own tools and equipment from watching YouTube videos and started making tools and knives on my own,” he said.

However, blacksmithing requires a specific set of tools, and these days, things like anvils are a lot harder to come by.

“Getting an anvil is extremely expensive because most of them were melted down for steel production during World War II,” Sam said. “Now they sell for $500 each.” Theirs cost $450 and weighs 150 lbs. Sam invested his own resources the first semester, but the cost did not stop Sam from putting together a makeshift forge in his own backyard to practice at home. 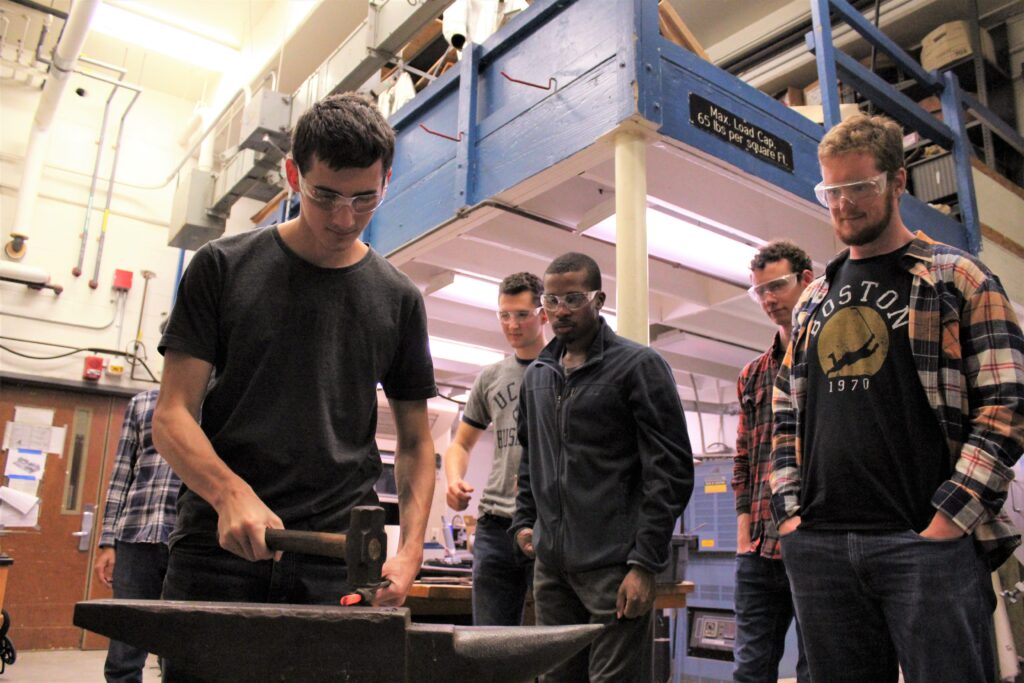 With more than 40 active members in the Metal Working Club, students are split up during meetings. Here, a group of students heat and hammer a bottle opener into shape.

“A charcoal forge is a lot easier to set up than a propane forge,” Sam said. He began with an old grill he had at home. He cut an opening so he could drill a steel tube inside and use it for the central unit airflow. Then he added insulation and refractory cement to withstand the high heat it takes to forge steel. “I ordered some items from Amazon, and got the rest from home,” he said.

On campus, they build and borrow equipment for projects.  In fact, prior to purchasing a propane forge, Sam and the Club members built their own forge from scrap pieces and a propane burner. Professor Hal Brody has worked with the students to provide access to the MSE foundry, and even critiques of their work. Because of the high-interest from students, they usually need to divide group members during meetings: one group works on heat treating, one does metalworking. In addition, they hope to collaborate with the School of Fine Arts to borrow their ceramic heater. While waiting for funding approval from the Undergraduate Student Government (USG), the MSE department has provided funding for startup items like the anvil and a propane forge, and Sam is providing tools from his own resources.

“Once I’d been doing that for a while, showing lab mates, friends and family my work, they recommended I do the bladesmithing competition at TMS,” Sam said, referring to the annual meeting of The Minerals, Metals & Materials Society.

While managing meetings with 30-40 group members requires working out a lot of logistics, Sam has experience as the vice president of UConn Material Advantage Chapter. He also participated in environmental campaigns with UConn PIRG (UConn’s chapter of the Public Interest Research Group)and the Husky Ambassador Program.

“I’d be doing all this stuff on my own anyway, so I kind of like teaching people and it’s nice seeing others interested in this stuff. We’re all having fun. It’s a good group.”

Sam, a fifth-year senior, hopes the group can make it to the annual TMS bladesmithing competition, even if it means he won’t be around to see it.