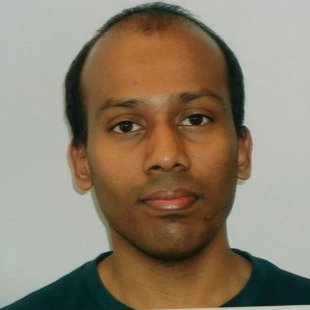 Following this “stronghold,” the graduate student joined the UConn student chapter of the Materials Research Society in 2012, acting as both treasurer and the president throughout his involvement. Despite these contributions to the materials science community, Venkatesh is actually a chemical engineering major. This background is reflected by his various internships as a chemistry modelling intern at Intel Corporation for the summers of 2013 and 2014, and his current internship with Pfizer.

After working alongside Venkatesh for five years, Dr. Ramprasad has become familiar with the research assistant’s outgoing personality and dedication. He says, “[Venkatesh] has contributed a lot to the Materials Sciences and Engineering Department, and I think that tells about his initiative, his willingness to contribute and provide service in a bigger sense. He also participates in the open houses for MSE, and for chemical engineering. He has done a lot for the department.”

Venkatesh’s research interests include computational catalyst design, as well as micro-kinetic modelling and machine learning. With his research group, he is currently “developing new in silico methods based on quantum mechanics, along with novel machine learning techniques, in order to model chemical reactions and the behavior of materials.”

Dr. Ramprasad is very proud of the work Venkatesh has done with this project. “The problem I had given Venkatesh…involved a fair amount of new method development—new theory development, new code development, and so forth. There’s not much past work to go by… making it more challenging than the average problem that we work on. Venkatesh has risen up to these challenges and has done exceptionally well.”

When asked about the inspiration behind his hard work, Venkatesh mentions Elon Musk, a South African-born, Canadian-American engineer, inventor, and investor. He has been part of the founding of SpaceX, Tesla Motors, PayPal, and is the CEO and chairman of multiple corporations. Relative to the business magnate’s success, Venkatesh says, “I believe scientific development must be accompanied with use to society, and that’s exactly how I base my contributions.”

On MSE specifically, he goes on to say, “Materials science has become an integral part of several sectors, e.g. semiconductor, energy, oil and gas, pharmaceutical, etc. An understanding of how materials behave is critical in the design of the next-generation materials that can hopefully alleviate current deficiencies.”

In five years time, the graduate student sees himself as a lead scientist in an industrial company pushing the importance of computational methods. However, he keeps an open mind, saying, “Accomplishments are like goals; their importance changes with time.”

Although this goal may evolve, such an intelligent student has many opportunities for his future. Dr. Ramprasad reflects, “That independent streak, creativity, innovation, and passion are things you want to see in a grad student, and Venkatesh has all of them.”