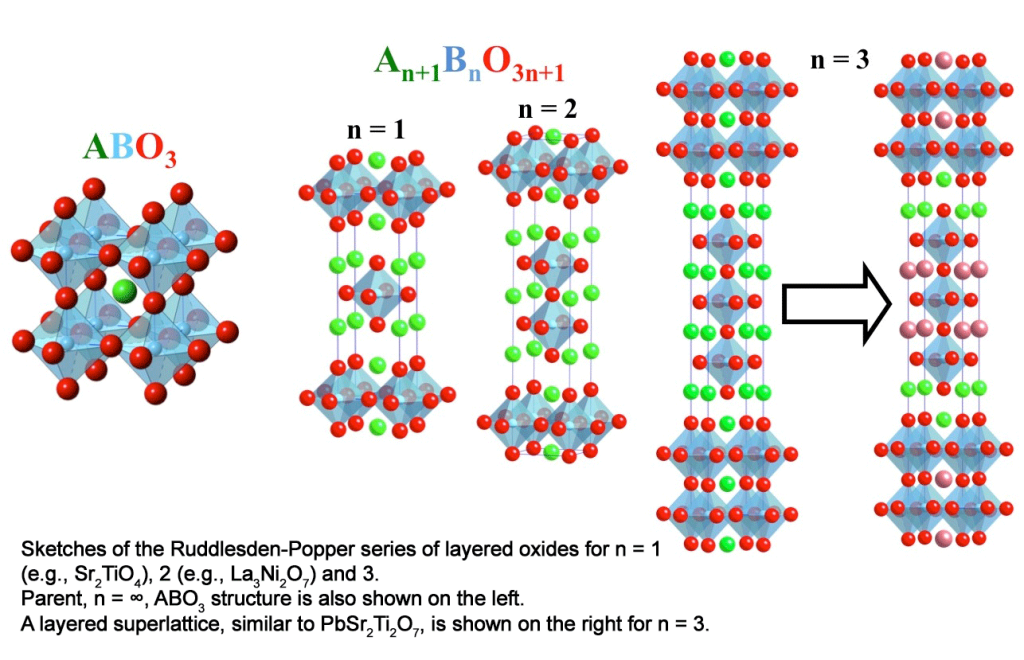 The article, “Dynamic Layer Rearrangement During Growth of Layered Oxide Films by Molecular Beam Epitaxy,” has been selected for advanced online publication on Nature Materials’ website and is also featured in the “News and Views” section of the Nature Materials September 2014 issue. The paper marks the culmination of a three-year project that was seeded in 2010 under the Argonne Strategic Initiative in Materials Design. The project, “Synthesis Science of Functional Layered Complex Oxides,” was dedicated to the development of the first in situ ternary-oxide molecular beam epitaxy (MBE) system for the synthesis of novel layered-oxide materials.

One of the candidate compounds proposed for this cutting-edge MBE system is Goldstone ferroelectric PbSr2Ti2O7, a layered perovskite oxide Serge Nakhmanson and Ivan Naumov predicted with the help of density functional theory simulations. While material properties have to strictly conform to structural symmetry, this particular compound appears to violate this principle, exhibiting no preference for the orientation of its unit cell polarization. Although PbSr2Ti2O7 still awaits synthesis, the team’s attempts to grow similar layered structures have led to several contributions highly valuable to future efforts aimed at the design and discovery of functional oxides, one of which is reported in the paper.

Complex oxide materials, such as ABO3 perovskite structures, are highly versatile and possess a variety of useful functionalities that are critical for a wide range of promising technological applications. A large number of these materials have already been extensively studied and their functional properties well characterized. Improving on these functionalities or designing new and advanced ones, however, remains a great challenge because proposed advances can only be achieved in more complex structures (e.g. perovskite superlattices or layered compounds) that are more difficult to synthesize. In order to construct these intricate new materials, researchers need to know precisely where individual atoms go during the growth process and how growth conditions can be altered to produce intended geometry.

Modern solid-state synthesis techniques already utilize state-of-the-art technology. MBE is simultaneously the most difficult and flexible of these methods, allowing researchers to grow oxide films by spraying atomically thin layers one at a time with great precision. However, addressing the challenge of “knowing exactly where the atoms are going” in order to construct new materials that are usually reluctant to come together requires the development of in situ (watch-as-you-grow) capabilities. The team accomplished this feat with the design of a unique MBE system utilizing the power of Argonne’s Advanced Photon Source (APS), a synchrotron that produces the brightest X-ray beams in the Western hemisphere. The results of the synchrotron experiments were combined with intensive density functional theory and classical molecular dynamics simulation studies to reveal subtle layer rearrangement phenomena occurring during film growth.

Professor Nakhmanson comments on the details of the growth process described in the paper:

If you draw out the structure of the desired layered oxide on a piece of paper – or build it on a computer, which is now more common – and then try to grow it by spraying atomic monolayers on top of one another the way they are drawn, you will not get what you want. That is because, as they are being sprayed on, individual monolayers will interact with each other, which may sometimes result in large structural changes. Some layers may “sink down,” while others may “float on top” of your film, and the specific details of these interactions depend upon the chemical identities of the layers we are trying to put together. However, the layers that sink do not go all the way to the bottom, but after a few of such “layer flips,” they get caught within the growing structure and stop moving. Therefore, in order to grow the material that you want, you have to take this dynamic layer rearrangement into account and spray layers out of trivial sequence.

The team developed these insights for the layered-oxide materials that belong to the Ruddlesden-Popper perovskite homologous series, which also includes ferroelectric PbSr2Ti2O7. Dynamic layer rearrangements were first studied for Sr2TiO4, a simple and well-studied layered material. In order to demonstrate the broad efficacy of the new growth strategy, the researchers then used the same techniques to grow the first thin film of single-crystalline La3Ni2O7.