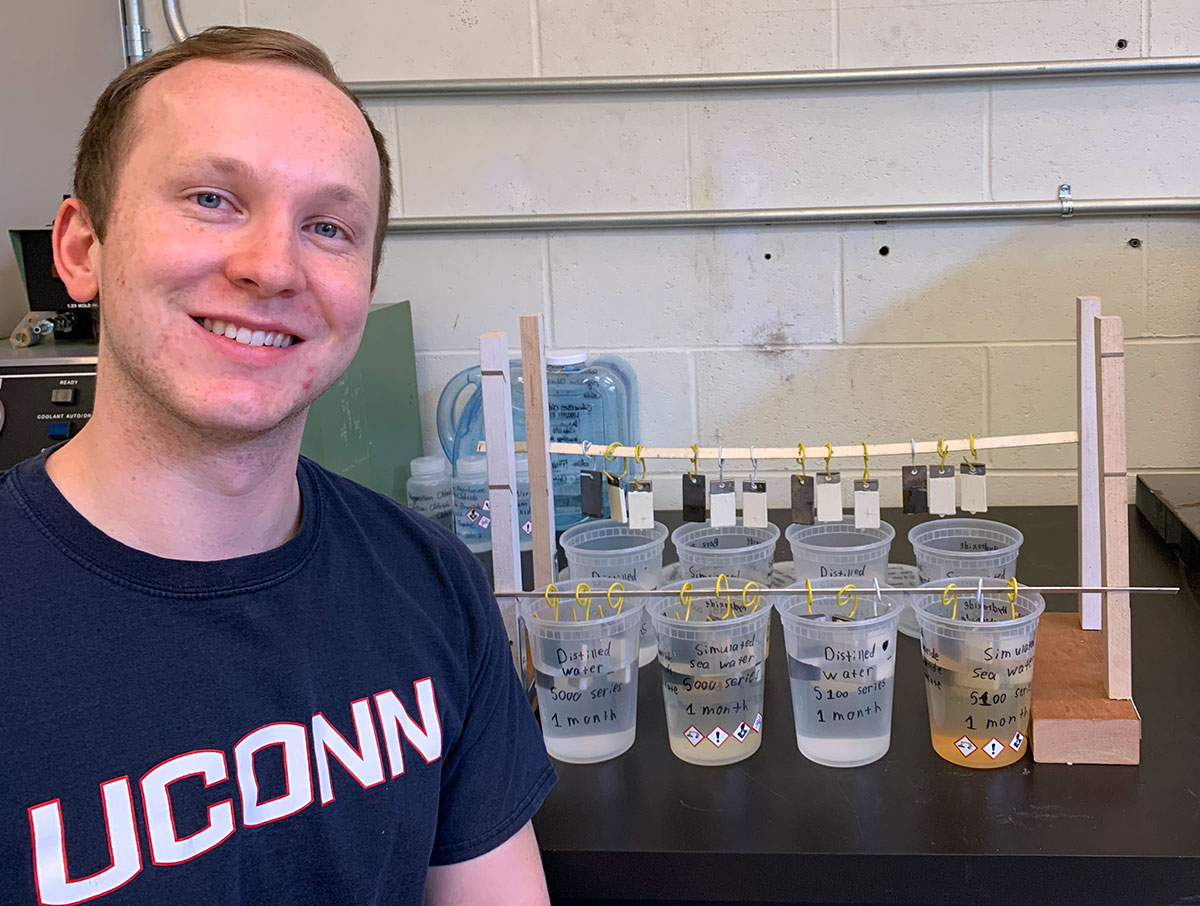 MSE Senior Alex Perkins pictured with the simulated seawater baths used in his research project. Steel coupons are placed in the water baths and corroded.

When UConn MSE undergraduate student Alexander Perkins was in the spring semester of his junior year, he noticed he had some free time in his schedule. He decided to fill this open spot by joining a research project. This led him to MSE Assistant Professor Lesley Frame, and a corrosion research project that caught his attention. Perkins, now a senior, is working on predicting material loss rates for active corrosion on bridges.

According to Perkins, the main goal is to identify corrosion products as a function of environment and time for different steel compositions and with different protective coatings. Frame’s group is looking at specific corrosion products and characterizing them in order to understand the material loss rates better. They are collaborating with CEE assistant professor Arash E. Zaghi and MSE Associate Professor Serge Nakhmanson’s research groups on aspects of this project.

“This project will help us understand how to better protect against corrosion of the steel that is used in bridges and how that corrosion impacts the lifetime of the bridge,” Perkins said.

Perkins’ specific role in the project is preparing samples for corrosion tests, as well as planning the designs of the experiments for these tests.

Because corrosion is something that is often commonplace, it is Perkins’s main research interest.

“It’s something you see every day, so I want to know more about it and what causes it,” Perkins said.

This fascination was influenced by his MSE classes. Perkins’s favorite class so far has been MSE 3020 Failure Analysis, which he took with MSE alumni (Ph.D. ’02) and Adjunct Professor Daniel Goberman. Corrosion, in addition to being widespread, is a common cause of failure in materials. This makes Frame’s project a perfect fit for Perkins’ academic interests.

Perkins became interested in materials science right before he arrived at UConn. While he was in high school, he attended an open house and talked to one of the students at the MSE booth. The demonstrations at the booth caught his attention and MSE seemed more interesting to him than other forms of engineering.

Now towards the end of his undergraduate career, Perkins is starting to look towards the future. After graduation, he plans to enter either the medical device or aerospace industries.

For MSE students who want to start researching but do not know where to begin, Perkins has some straightforward advice.

“Just go talk to any professor who you think you’d like to do research with. All the professors in MSE are really approachable and support undergraduate research in their labs. If their lab doesn’t end up being a good fit they can recommend another professor to talk to,” Perkins said.