A Tribute in Memory of John Eric Morral 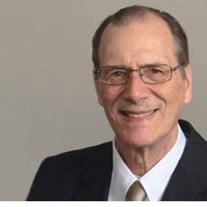 To the MSE community,

John Eric Morral, prior MSE department head as we made the important step to add an undergraduate degree in 2003, passed away earlier this past year. He became a fellow of ASM International in 1995, was awarded the Gibbs Phase Equilibria Award in 2017, and for many years edited the Journal of Phase Diagrams and Diffusion. Professor Pamir Alpay, Associate Dean, notes “John was an excellent researcher and a great mentor. We will all miss him.” Professor Mark Aindow, Executive Director for Innovation External Engagement, and Industry Relations, recalls “John was truly a gentleman and a scholar. Although he was very modest about his achievements, his contributions to the field of metallurgical thermodynamics were seminal. His work on complex diffusion problems and phase diagrams in particular received international recognition.”

There will be a memorial service at the Schoedinger Funeral Service Northwest facility in Columbus Ohio on July 30. There is also a website with his obituary and a “tribute wall” for those who wish to learn more, or to leave a memory for his wife Dot and extended family and friends to enjoy.

While John and Dot do not have one favorite charity, they regularly supported both The Cancer Society and Habitat for Humanity. If you wish to make a donation in his memory to UConn MSE in recognition of his profound influence on our program and alumni, please do so via the UConn Foundation. We recommend giving to the MSE unrestricted fund, in memory or honor of John, upon which proceeds will explicitly go towards advancing materials science through student scholarships and a special guest lecture in his name.

Terry Hennesy, PhD student with John and later an adjunct faculty member for our department, remembers “John was the smartest, wisest man I ever knew, and one of the few people I actually wanted to emulate.  Although I could never approach his prowess in theoretical physical metallurgy, I tried to adopt his gentle, encouraging teaching style, his willingness to embrace changing technology, his friendly acceptance of newcomers, his open-minded curiosity about subjects beyond metallurgy, and his stubborn commitment to his principles.” Hal Brody, distinguished professor, summarizes, “we were lucky to have worked and studied with John.”